I just posted an essay called “American Lament” on my buzzkill of a second blog, Matters of Conscience. This primary blog, A Napper’s Companion, will probably be quiet a little longer–until I can write about beauty again.

I alert my Nappers to this lament because I know some of you will be interested. But I’m not encouraging or asking anybody to read. This was something I felt compelled to write. 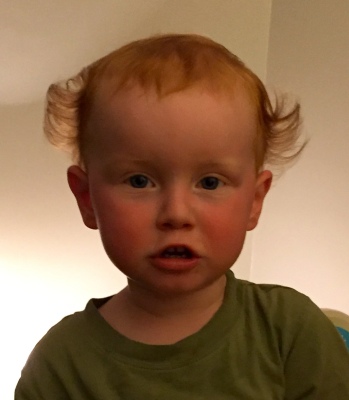 I’ve written a letter to my daughter that some of you might appreciate and posted it on my other blog, Matters of Conscience. Although what I have to say is ultimately hopeful–I think!–it’s dark enough that I don’t want it casting gloom here on A Napper’s Companion. 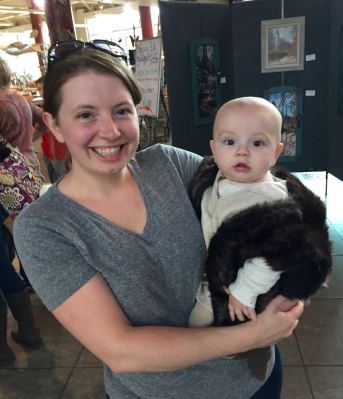 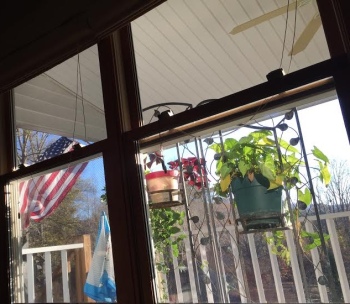 This evening before the dreaded presidential election, wife Kathy and I are heading back to Pennsylvania after visiting my sisters in North Carolina. Our objective was simple: relax!

Yesterday we awoke in the joyful home of sister Cindy and her spouse Linda. We didn’t get out of bed right away, but breathed and gave thanks for the view out the guest room window: clear sky, hanging plants and American flag rising and falling with an occasional breeze.

We also gave thanks for other loved ones who stayed the night: eldest sister Cathy and her spouse Betsy Ann; and Linda’s daughter Tina, her spouse Rebecca, their toddler son Liam and infant daughter Renley. Four affectionate and slightly spastic dogs and a mellow cat named Hermione added diversity and commotion to the gathering.

As we talked off and on about what is consuming millions of Americans at the moment, I learned that one voter’s presidential election can be another’s painfully personal referendum.

Thus far my anxiety about our country’s future has been generalized. The women I listened to over breakfast yesterday share my concern about the economy, foreign relations, immigration and the planet, but they also fear the threat a Trump administration might pose to who they are as human beings.

With a Supreme Court fortified by judges favored by the Republican Party, will their marriages be under assault? Will the acceptance they’ve found recently as citizens be repealed? And what about the health insurance one married partner often provides for the other? Is there any way that same-sex couples could be denied that benefit all over again? After all, if Roe vs. Wade might be up for debate after forty-three years, why not the legality of gay marriage?

Kathy and I celebrated our thirty-third anniversary this year, and we’ve never had to contemplate our vows being cancelled by the Supreme Court.

My wife shares roughly the same profile as the Democratic Presidential nominee. If she wins, I imagine Kathy and other women will feel a burden lifted and an inexcusably overdue affirmation bestowed.

What will I feel? I’m a white, heterosexual male. My validation has been grandfathered in for centuries. I can’t remember ever being denied anything because of my packaging. Nobody has ever suggested that the person I understand myself to be is uniquely lacking, broken or abhorrent. Where social stability is concerned, I’m close to the top of the food chain.

But Cindy, Linda, Cathy, Betsy Ann, Tina and Rebecca face tomorrow with a fear I recognize but can never really know.

I can name beauty when I see it, though, and these women are among the kindest, smartest, most upright and beautiful people in my life. The warm North Carolina air was refreshing, but Kathy and I don’t drive ten hours for the southern climate. We take time to visit our unorthodox family because we find overflowing goodness and safety with them.

If you think that gay marriage is sinful and should be illegal, I wish you could meet my gay sisters and witness their tenderness and compassion. I wish you could hear how they struggled to find peace within themselves and how falling in love turned their landscapes into rich expanses of grace.

Their troubled sleep this night is difficult to bear for love’s sake. Of course, millions may lie awake in the small hours of this morning, wondering how many of the votes cast will say, “America is not your home. You have to leave. Your language is an annoyance. Your skin is ugly and so is your soul. You’re being checked out, and this we can tell you, we’re not impressed.”

When I vote tomorrow, I’ll be thinking of my family in North Carolina and every other sister and brother who want nothing more than to run into the open arms of a compassionate country.

Now, checked into a hotel in Summersville, West Virginia, I sip privileged wine. Kathy tells me the pizza just delivered is really good. And I make this promise: “Whatever happens tomorrow, the years ahead are sure to hurt, but you’re not alone. Plenty of Americans like me–especially those who don’t pretend to know what all you’ve gone through–love you and stand with you. When you were born, the cosmos rejoiced.”