Dogs have occupied my thoughts lately, mostly because foxhound Sherlock Holmes, who moved in last December, finally reached a milestone that his predecessor Watson had licked from day one. Our lanky detective hopped up on our queen-sized bed, curled into a big boney oval at my feet and slept there all night long. His first night with us, black lab-terrier mix Watson yipped and yiped in his crate until Kathy and I relented and nestled him between us.

This was adorable, but risky. He wasn’t housebroken. Whether by miracle or fate, Watson leaked not a drop. I suppose he knew that he had found room in the safest of inns. There wasn’t more than a handful of nights from 2004 to 2016 that Watson didn’t snore in the crook of Kathy’s leg or under the shelter my arm, his head pressing my nose flat.

His stay with us was sickeningly affectionate from the start. Sherlock Holmes, on the other hand, has been sizing us up at his own cautious pace. I don’t blame him. He endured trauma of some sort during his three years before landing at the shelter where we found him.

The nerved up guy becomes a maelstrom of fang and claw whenever we try to administer medicine. No malice is intended. He’ll let me dig deep into his ears for some heavenly itching—my fingertips nearly meet at the center of his skull—but let me sneak a dab of ointment into the transaction, and he beats a retreat and says, “Et tu, Brute!”

Our veterinarian prescribed a sedative should we need to bring our leggy pal in for treatment. Sherlock’s initial checkup was bananas. Imagine subduing a creature wildly swinging four fur-covered shillelaghs tipped with little spikes. Again, it’s nothing personal, only no injections or palpating permitted.

Grandson Cole with Sherlock Holmes. Those fur-covered shillelaghs are really something!

So the intimacy between dog and human that profoundly nourishes both has been slow to take hold. Son Micah smears peanut butter on his nose to invite a kiss. Meanwhile, Kathy and I have patted our mattress and pleaded ourselves hoarse: “Come on, buddy. Come up with us.”

As so often happens in my life, the milestone passed quietly and unbidden. The other day Sherlock was suddenly up on the bed, sleeping as if engaged in a routine. Same thing happened the following night, but since then he has occupied the couch.

We’re not complaining, though. When his doggy synapses so compel him, he’ll arrive to hog our legroom and give both of us a reassuring pat on the spirit. Meanwhile, the Colemans have decided to let Watson of blessed memory be Watson and let Holmes, here among the quick, be Holmes.

Not that there’s any alternative. What’s true of dogs is true of humans and anybody else with hearts and eyeballs. During a recent session of chin wagging, friend Judi put the matter perfectly. As we lamented folks with disputatious personalities, she tapped a verbal gavel: “Sometimes you have to accept people the way they are.”

The late Fred Rogers would agree, and so do I. Obviously the path of acceptance shouldn’t lead to staying in an abusive relationship, hobnobbing with a psychopath or spooning with a king cobra, whose venom the Encyclopaedia Britannica claims can “kill an elephant in just a few hours.” 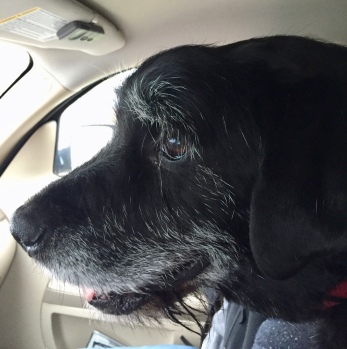 In the car on the way to the vet’s office. An hour later, Watson was gone.

Old pal Watson’s worst offense was sudden crystal-shattering barks for no discernible reason. We learned to live with it. Sherlock’s baying is equally loud, but we know exactly what he’s fussing about.

When I get home in an hour, he’ll be jonesing to run. I mean, he sprints with such abandon that his back legs can’t keep up with his front. The result: those back legs dangle behind his body, momentarily swaying carefree until they touch down again.

Until I drive Sherlock to the dog park’s glorious acres, he’ll hoop and whine and wander about the house, clicking his nails on the hardwood floor. There’s no changing this foxhound’s stripes or taming what his Creator intended for him. 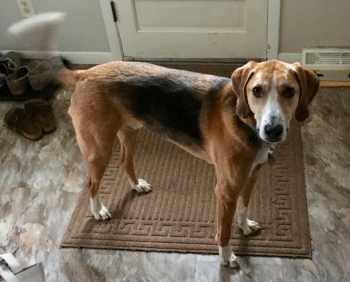 Sherlock Holmes this very day, tail a blur of waggery, his heart at home.

Funny thing is, I’ve come to love our goofy dog exactly as he is. With each passing day, his place in the family grows more sweet and easy. And this is the moral, if you ask me. Acceptance begets acceptance. Love begets love.

I can see this truth in Sherlock’s face—I swear. We let him be who he is, and he understands somehow or other, “These people love me. I think I’m going to like it here.”

Oniontown Pastoral: Riding a Pony on a Boat

Lyle Lovett, whose frizzy pompadour was once a natural wonder, wrote “If I Had a Boat” while skipping a college class. Unable to figure out what he wanted to be when he grew up, he said, “It’s a song about possibility . . . a song about being a cowboy out west and the captain of a great ship.” 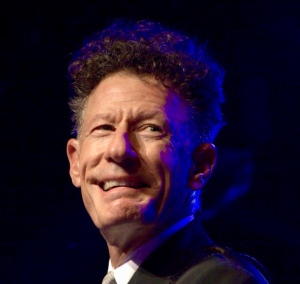 Well, it’s Lovett’s song to explain, but I hear in its whimsy an impulse to leave behind the stifling and disappointing. In one verse, the country crooner has Tonto, who does the Lone Ranger’s “dirty work for free,” saying, “Kemo Sabe, kiss my ass, I bought a boat, I’m going out to sea.” The delicious hutzpah elicits whoops and applause.

Lately the song has become a hymn to me, in part because of the legendary sidekick’s impertinence. From time to time—and I ask this in a sincere pastoral tone—don’t you want to bare your bum to civilization and “go out on the ocean”? To ride a pony toward a horizon of possibilities? I sure do, and saying so constitutes a confession that the good Lord would probably understand.

I’m not indulging in a rant or snivel here. The truth is, we’ve all had weeks that deserve to be hauled out into open air and shared, for the sake of commiseration if nothing else. The truth also is, a village preacher can either succumb to despair or maintain a cargo hold stocked with hope. The latter has stood me in good stead, and I’m not about to change course now.

So, about this past week.

For starters, I visited an old friend who has been in declining health. He couldn’t rouse himself from an awful dream, the highlights of which he narrated between groans and shouts. “I want to get the hell out of here.” “I need a place.” “There’s nothing I can do.” “Help me.” His manner was delirious, but, in fact, he captured the plot perfectly.

A woman in the next wheelchair patted my friend’s arm, mouthed a prayer, then pulled her fleece sweater up over her head in turtle fashion.

So I prayed them both a boat out on the ocean. This was their fervent wish. Why should they be moored for one minute longer in such troubled waters?

This painful visit was followed by news that hit like a rogue wave. Wife Kathy and I were settling into bed for a bout of reading when she learned that a dear friend’s ex-husband had died in a tragic accident.

I first heard Lyle Lovett’s playful song on a recording this friend had made for Kathy and me. I wish we lived on the same continent so that we could shoot misery the moon and sing a hymn about riding a pony on deck. 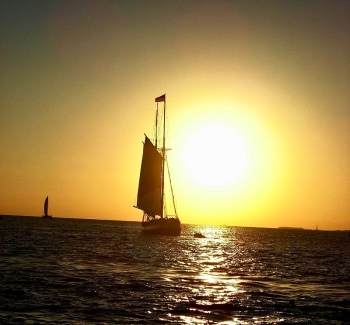 I never met our friend’s ex, but did get to know recently one of their adult children. And, of course, a divorce doesn’t sever all ties of affection. There’s plenty of pain to go around. In this moment, the hope in my cargo hold looks meager next to unexpected death. I have little to offer. But what else is there besides hope that a capsized vessel–or a life overturned–will right itself and remain seaworthy?

In the week’s final glancing blow, The New York Times notes this morning the death of Leon Redbone at age 69. According to his death announcement, the quirky, secretive troubadour “crossed the delta for that beautiful shore at age 127.”

“Oh behave yourselves,” he said in a prepared sign off. “Thank you . . . and good evening everybody.”

No doubt Redbone wanted fans like me to keep our chins up, which is wise counsel. (Of course, when death has stolen a loved one, your chin and all the rest of you can certainly droop for a while.)

I still haven’t grown up yet, but as my collection of bad weeks becomes a flotilla, singing helps me to gaze across the delta at that beautiful shore.

One day we will “all together go out on the ocean,” not to give Kemo Sabe what for, but to point our pony’s face into the spray and gallop for joy.