Oniontown Pastoral: Why I Kiss My Wife’s Hand

I know what you’re expecting: Here comes another edition of “Now, Pastor John Will Warm the Cockles of My Heart.” Well, sisters and brothers, think again.

This morning as I drove Kathy to work, I did, indeed, kiss her hand, but what were once pecks meant to say, “Sure do love you” have evolved into lips reluctant to pull away, lips that would say, “Sure do need you.” My gesture used to be mostly an offering, a reminder, but in this season of civilization, I’m drawing succor and forbearance from the woman who has tried to understand and abide me for 36 years.

So, to the kiss in question: at a red light, I held her hand to my lips, closed my eyes and breathed in and out. A woman driving by apparently saw and smiled. An hour ago Kathy sent me a message: “You made her day.”

Maybe so, but I’d like to explain to this stranger that I am romantic, a real sweetie pie, but what she witnessed was much less an amorous husband and more a man crouched on his roof during a flash flood, tree branches and neighborhood “disjecta membra” swept away by the current.

The water punishing my home’s foundation at present is not only the erosion of the societal expectations Americans have historically honored—imperfectly and inconsistently, to be sure—but also the delight some of my fellow citizens seem to take in dancing on the grave of noble behavior.

I’m not talking about high-minded philosophy or fervent religious belief, but about the simple words that rolled off the tongues of my elders:

You can add dozens of sayings to my list, and, of course, there are exceptions to any adage. For example, some situations demand an unvarnished truth that isn’t nice, maybe quite stern, but no provocation warrants cruelty.

I’ve long ago stopped harrumphing about folks chewing with their mouths open and yawning with noisy abandon in public, two trifles that drove my father to distraction. Why bother fishing a plastic straw out of a tsunami?

What I can’t stop mourning, however, are the standards of thought, speech and conduct that I grew up with being moment by moment trodden under foot. Worse, when I see one person rejoicing in the misfortune of another or insisting that a clearly documented fact is actually false or constantly and proudly acting out in ways that would put a preschooler in timeout, I’m both pained and drained.

If you think I’ve got one public figure in mind, you can relax—or clench up, as you please. My scolding finger is pointed at millions, and I’m done apologizing for it. When our mothers told us to behave ourselves, who among them would have overlooked sucker punching a friend on the playground or equivocating with one arm elbow-deep in the cookie jar? Not mine, God rest her, that’s for sure. In her generation, actions that now don’t even raise an eyebrow might send children to bed without dinner.

Much merriment is had these days at the expense of sensitive souls like myself who aren’t ashamed of tears shed because the beliefs we embrace are sailing into the horizon of this flat earth.

Last night’s news reported that binge drinking among senior citizens is on the rise. Why? Nestled in the list of feeble theories was “social change.” Yeah, no kidding. Millions of people over 65—and many considerably under—no longer recognize their native land. I’m not referring to hot button issues, but simply the scurvy, sinister way folks treat and address each other.

Forgive me. I realize not a single heart cockle has been warmed, but an amiable Oniontown pastor must on rare occasion be given leave to share thoughts that let a chilly draft into the bed chamber.

Most days, kissing Kathy’s hand provides all the solace I need. Her skin, so familiar and dear after nearly 40 years as a couple, reminds me of how much grace and blessing crowd around me in this life.

Once in a great while, though, I have to pull my lips away and speak. Today is thus. 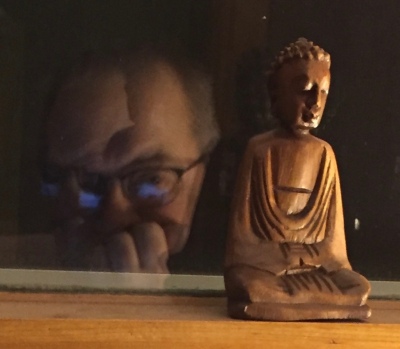 3 thoughts on “Oniontown Pastoral: Why I Kiss My Wife’s Hand”