Mea Culpa, Cecil Rosenthal! I Say to You, “Arise!” 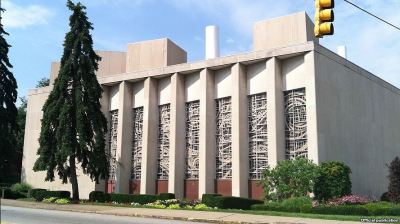 Pools of blood. Let us be graphic. Scatterings of brain, pieces of brain. Let us press a fist into our breastbones as we speak. Shrapnel made of skull. Let us behold hatred made visible. The mantle soaked dark red, the scroll stained? Let us run toward the wretched truth as recklessly as police did the synagogue door. The day for decorum has passed. Platitudes be damned.

“Our thoughts and prayers are with the victims and their families.” Yes, well, spare them. If I’m right that God is love, then the eleven who were executed in Tree of Life Synagogue don’t need a single intercession from any of us. As for loved ones, I daresay what they need far more than petitions are witnesses willing to name the evil at work and claim their share of responsibility for bringing it under submission.

Our most efficacious prayer, then, would be to stand over the still bodies, to look closely and mindfully and not to turn away. If we can’t do so in the physical Squirrel Hill sanctuary turned slaughterhouse, then we can imagine. That’s what we owe the dead. In fact, that’s what we owe ourselves. That’s what we owe our country. To stare down carnage, to rend our hearts, to reject euphemisms and the lazy comfort of denial.

Do I sound gory? Maybe so, but thoughts and prayers as numerous as the stars in the sky, well intended though they may be, make clear that what we really want is for Yahweh to swoop down and clean up our mess for us—a request that would make wise parents shake their heads and say, “This is quite a mess you’ve made. Best be about cleaning it up.”

Unfortunately, I can’t clean up what’s not real. Like Thomas, I have to put my Christian hand into all the wounds. I have to touch the mantle. kiss my fingertips, and see the Tree of Life Torah for myself.

I’m as culpable as any other American, “in bondage to sin and unable to free [myself],” as my Lutheran confession reads. Every Sunday I stand in worship and join brothers and sisters in owning up: “We have sinned against you in thought, word, and deed, by what we have done and what we have left undone. We have not loved you with our whole heart; we have not loved our neighbors as ourselves.” 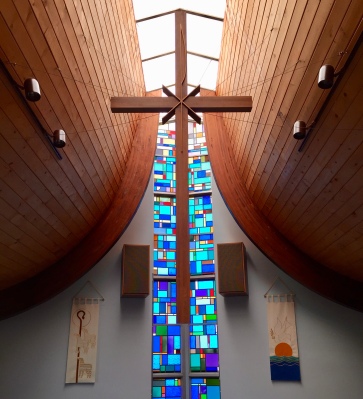 So I begin with love of neighbor, with eleven faces and the brutality of their death. Without succumbing to paralysis, I take what happened to them personally. How would it feel to be the son of 97-year-old Rose Mallinger or 88-year-old Melvin Wax, who emerged from his hiding place too early? In this moment I imagine that my own mother was one of those shot in the back of the head—as some were—and a flush of despair fills my chest.

You may accuse me of wallowing, but I consider such self-interrogation to be prayer, a way to honor the fellow human beings who have gone on to glory—or so I believe. Keeping a safe distance from Tree of Life amounts to giving wordless consent to the next massacre and all that makes it possible.

Being imaginatively present to my Jewish brothers and sisters would be beyond redemption but for the Gracious Mystery who accompanies me as I receive bottomless wounds, crevasses in beloved flesh. I’m accompanied throughout the task at hand: to announce, to myself if no one else, yet another holocaust among the quick and the dead.

I imagine Cecil Rosenthal. His face is the most real to me. He lived with his brother David for all of their adult lives. “Two mentally-handicapped men,” writes Paul Berman in Tablet. Cecil, 59. David, 54. The latter quiet, the former huge, gregarious, the life of the party. 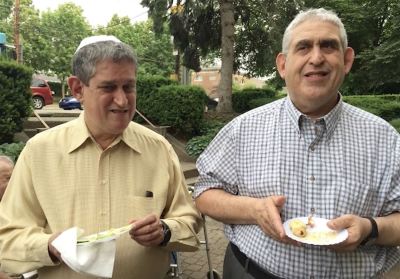 Their lovely faces are without guile. God touches their cheeks, damp with tears of homecoming.

Cecil was Tree of Life’s official Torah bearer. He carried the scroll up and down the aisles so worshippers could touch the mantle with their tzizits (ritual fringes) or siddurs (prayer books) or hands, then kiss what has touched the mantle. Reverence and joy!

Outside of the synagogue community, observers may suppose that Cecil and David needed Tree of Life, but I bet my last dollar that every last congregant would say Tree of Life needed Cecil and David. Within the sacred, eyes see truths mystifying to the profane.

Now Cecil bears the Torah, walking slowly, pausing to receive my touch and witness my kiss. In this prayer, I realize that Cecil doesn’t need me so much as I need him. The word doesn’t need me. I need the word. I need Cecil to bring me the word. I’m broken.

I want to know how he and his brother died and where. I want to know if they were frightened, if they suffered, if their sweet smiles shone at the last. They were my brothers. I wonder.

I’m sorry, Cecil. I’m sorry, David. Oh, Lord, tell my brothers that I have something to say to them.

“Mea maxima culpa, Cecil Rosenthal. I say to you, ‘Arise! For love’s sake, hold before me the Torah. I have to do my part to clean up this mess, but I don’t even know where to begin. You know better than I. Bring me the Sacred Words, then return to your repose. You and David rest where you’ll be safe, once and for all.” 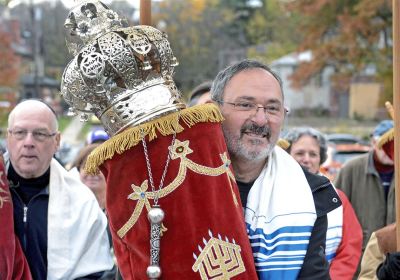