Over forty years ago the Erie Thunderbirds Drum and Bugle Corps was working on a routine when the music abruptly stopped. After a murmur from within the ranks, the drum major called out, “Would you kiss your mother with those lips?” Obviously somebody had fouled up and let slip some colorful language. Marchers and spectators alike laughed long and loud, and I tucked that jocular question into my mental chest of superb comebacks.

As Mom has been on my mind lately—and Dad, too—the drum major’s words have emerged from mothballs and nagged me. Specifically, I’ve been thinking about manners. I don’t remember first learning them, but the four Coleman kids knew the drill. Some rules were about appearance, like not holding your spoon like a shovel, but most focused on how we treated other people. Only recently have I begun to appreciate “mind your manners” and what that expression implied at 2225 Wagner Avenue. People matter. Their feelings matter. Their well-being matters. Their time matters.

My mother was a curriculum of care and tenderness unto herself. I fell asleep with my head in her lap. She tucked my 1970s hair behind my ear, which annoyed me back then. I miss that now. My father was also loving, but with a no-nonsense edge. If you wanted to see him scowl, boo from the bleachers. Not even a lousy performance deserved that. At one Thunderbirds practice, the soloist who played “Brian’s Song” was absent, so another horn stumbled through the piece. As Dad and I walked to the car afterwards, I said too loudly for his taste, “Boy, they sound like crap without Ronnie.” I can’t recall the verbiage, but his message was clear: My remark was not only impolite, but hurtful.

People matter. So when they ask how you’re doing, you ask about them, too. Please and thank you. Hold the door. Leave things better than you found them.

Name-calling was unacceptable. Once while shooting hoops in a neighbor’s driveway, my buddies and I spotted old Louie walking to the bus stop. He was grieving the passing of his partner of many years, but we hid in some bushes and roared a slur that begins with “f” and ends with “aggot.” Mr. Snell was out his back door before the echo died: “Johnny, we don’t say things like that.” In my fifty-seventh year, the shame still sits heavy in my throat.

Such schooling was bruising, but the diploma has been a blessing. When kindness reigns, peace like a river attendeth my way. It follows, then, that rancor and distain dam up my soul. This reality visited me a couple weeks ago as I watched “Won’t You Be My Neighbor?” a profile of Mister Rogers on public television. He is my hero, which may suggest to you my definition of wisdom and bravery.

The man’s voice alone sent me into a crying jag. Wondering what Fred Rogers would say about how folks treat each other in 2018 got me teary. Picturing him bent low, comforting an immigrant child who had been separated from her family brought me to my knees. I was undone.

Images of terrified toddlers are more than sob-worthy, but my upset runs deeper still. With each passing day, with each cackling, growling news cycle, the land I love becomes more a hostile stranger and less a trusted friend.

What’s gotten into us? Have those of us fortunate enough to grow up in healthy homes forgotten where we came from? Is it acceptable to treat our fellow citizens with disdain and shout vulgarities at each other as I did at Louie, hiding like a punk behind shrubbery? What about the trash babbled within the cowardly foliage of social media? And is shabby behavior, no matter the provocation, respectable as long as our parents have gone on to glory or aren’t watching? 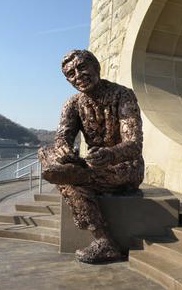 Finally, should we feast on fearful and scurvy impulses just because our elected officials routinely do so, turning their backs on values they ought to champion? Of course not! It’s easy to dismiss the drum major’s question as silly, but half-truths are often spoken in jest. The point, after all, isn’t about kissing our parents, but conducting ourselves in ways that would break their hearts.

Or maybe our upbringing is best seen in a rearview mirror. Maybe dear Mister Rogers is not only dead, but extinct. Or maybe the manners we’ve left behind and the love once shown us are exactly what the world needs, as my father used to say, “immediately if not sooner.”

What the World Needs

6 thoughts on “Johnny, We Don’t Say Things Like That”