Bing Crosby’s “White Christmas” playing in my ear buds is barely overcoming the percussive assault on Starbucks’ speakers—over which my beloved baristas have no control. The Mother Ship picks, I guess.

Not me. Music of the Nativity will decorate the Coleman house until the Epiphany, our idea being that it’s impolite to close down the celebration before the magi have arrived with their gold, frankincense, and myrrh. The tree is lovely. Leave it up. The songs are soothing. Keep listening.

Honestly, though, my reason for lingering in the yuletide has more to do with what has filled my soul’s stocking lately than with the Christian calendar. Over my fifty-four gift-giving seasons (good grief!), my thoughts have turned from what I hope to receive to what I’m fortunate to have. Much as I loved the packages I opened on Christmas day, never have I cared less about what would be in them.

A man would be greedy to expect more from his portion of years than I have right now. This understanding settled upon me as I lay in bed some nights ago while wife Kathy made doll clothes at the dining room table. Her sewing machine hums and whirs regularly in our Parkway Drive home, but hearing it embraced by the warm promise of sleep returned me to Wagner Avenue, where I grew up.

A sewing machine’s singing, like other music, is sweetened by rests. The gift being stitched together breathes, as does the whole dwelling.

My mother made her own skirts and alterations to our family’s clothes. It never occurred to me before that the sound of a sewing machine holds for me what was loving and healthy on Wagner Avenue. 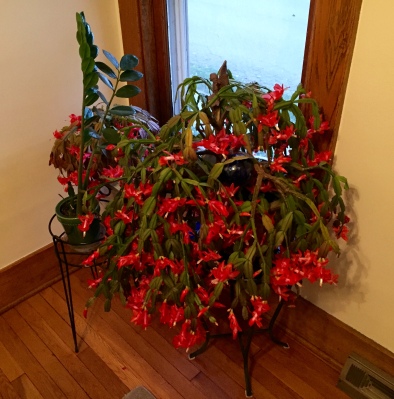 My mother’s Christmas cactus, once on Wagner Avenue, now on Parkway Drive

As I opened my eyes a crack to taste the hallway’s dim light and groaned at a throb of bursitis in my shoulder, the joy and affection that fed me long ago kept company with current blessings.

The Colemans are housed, fed, clothed, adequately employed, and reasonably healthy. In other words, we’re all okay at the moment.

Most of our life-stealing troubles have passed away or at least gone on hiatus.

Like many Americans, I wouldn’t protest if somebody threw unexpected fists-full of cash at me, but, thank goodness, money and possessions aren’t obsessions.

I’ve known the gladness of being a husband, father, grandfather, friend, and pastor. The people closest to me tolerate my shortcomings.

After thirty-two years, I love my wife more than ever.

I believe in a God of grace and mercy.

In the quiet between Kathy’s stitches, such unmerited gifts hemmed me in, behind and before. “Enough,” I thought, “much more than enough. More than plenty.”

But there was still more. There was Christmas day. Daughter Elena and son-in-law Matt donated immunizations and medicine in my name for Third World children. They thought about who I am and came up with that idea.

Son Micah made us close our eyes. After a minute, he told us to look. On our laps rested stockings. With 2015 being tight, we told the kids we would be skipping this tradition temporarily. “It’s not much,” Micah said, “but we’ve got to have stockings on Christmas.” Mary Janes never tasted so good.

Grandson Cole handed each of us a homemade ornament made out of some baked flour concoction. Like the others, mine bore a few smears of watercolor. “Cole paint that,” he said. Three words and earthly elements: a sacrament stirred in my chest.

When everybody headed home, Kathy said over and over again, “I had so much fun. That was the best Christmas.”

Just one more: Cole and I sat on the couch and shared peach pie a la mode. I got to watch him open his mouth for every bite as the Grinch and his rein-dog trumpeted their way back into Whoville to pass out gifts and share roast beast.

I’ve memorized all the kids’ Christmas shows. These days I would rather stay with my grandson’s eyes—merry and bright!—until I know them both by heart.