Here’s a bulletin! Over the last few years I’ve been discouraged about the state of the world. World: language doesn’t get much bigger. Solar system, galaxy, universe, and eternity all out rank world. In addition to a couple of newspapers and websites, my source for Earth’s latest information is ABC’s World News with David Muir. On the surface, this makes sense. If I want the most important updates available, why not depend on one of the big three television networks still broadcasting free of charge?

On the other hand, what makes the American Broadcast Company so wise? A few days ago after prayer-meditation, I beat Jesus, Mary, Joseph, the shepherds, and the magi to the stable in Bethlehem and had an epiphany, joyous and liberating. The various media have much to report, but they can’t cover everything. This one man’s Teletype constantly receives breaking news deserving of airtime and headlines. World News isn’t only the latest financial collapse, governmental absurdity, or breathtaking slaughter. It’s also unseen sacrifice, modest dreams fulfilled, or simple tenderness.

I beat the rush ahead of the Magi and received my Epiphany. (Credit: Sant’Apollinare Nuovo in Ravenna, Italy; on Wikimedia Commons)

As sickly as things seem these days, grace is everywhere, and probably more abundant than evil. But because I consume so much distressing information, I’m conned into believing that humanity is circling the drain. How foolish! My personal sources have told glad tidings of great joy lately. With love and hope, then, I offer A Napper’s Companion Christmas Letter made up of stories not covered by the mainstream media. 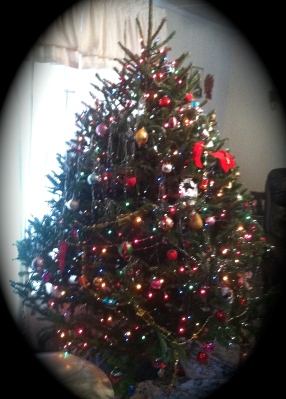 My buddy Ray put up a Christmas tree for his eighty-six-year-old mother, who stopped decorating after her husband died around twenty years ago. No media outlet picked up this story.

For Coleman family dinner, I was working so hard to perfect a chicken in a spirited mustard sauce that I neglected the corn chowder. I said to daughter Elena, “Hey, Len, would you mind trying to fix the chowder?” She hit it with nutmeg, salt, white pepper, a splash of hot sauce, and coriander ground with a new mortar and pestle from friend Mary. I contributed a stick of butter, and together we reached savory. Best of all, before we sat down to eat I hugged Elena and kissed her on top of the head. She said, “I love you, Daddy.”

In millions of kitchens, we help each other out with joy and speak of love. Snark and bicker visit, but I’ll wager overall we’re more kind than cranky.

Elena, one of my favorite chefs, with her baby bump. Families everywhere embrace, coddle kiddos, and create masterpieces together. I now consider this reality “world news.”

At a party last week, I sipped wine in the kitchen with friends Karri and Joe and kibitzed. Two of their daughters sat off to the side talking. Lauren is about to graduate from college, and Emily is in high school. Rarely would I tell anybody to freeze for a picture, but I figured this one might win a Pulitzer. Yes, Virginia, siblings can get along and do better than that: they can take care of each other. 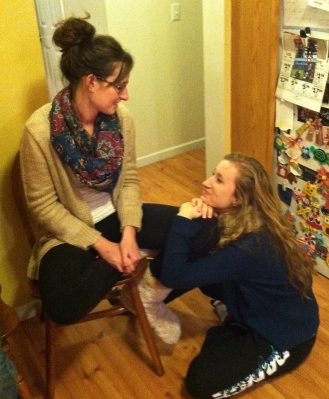 I recently visited a severely ill man and his family. He sat on the couch with feet up on an ottoman. His wife patted his leg, spoke words of comfort, and kept his morphine ahead of pain and distress. The man’s brother wrote a prayer, which he asked me to read—no way he could get the words out. It was simple, humble, fervent. We sat in silence afterwards, passing around Kleenex.

A slight tear ran from the corner of his eye. “I’ve tried.”

We all put a hand on the man and entrusted him to God’s care. When I stood to leave, his wife said, “John, wait. He wants to give you a hug.”

For over thirteen years I’ve watched death. Driving away from this visit, I took an unexpected gift with me. What a loving, attentive end, as gentle as any I’ve been blessed to witness.

And I know that this day, in lands everywhere and all fifty states, the living hold the hands of the dying and whisper, “You can let go. We love you. We’ll be okay.” 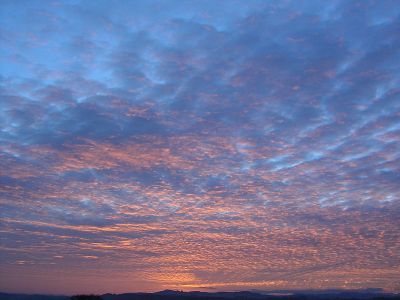 I’ve received a couple of gifts lately that are particularly moving. Both made and bought, they remind me that people who celebrate Christmas are thinking of each other, finding a present that will be received like a kiss on the cheek and a moment’s cheer to the heart.

No doubt, Christmas is awfully commercial, but we’re trying, aren’t we? Most of us? We do want to bring joy. On the news you see Black Friday stampedes, but not the man standing alone in the store aisle, praying to find his beloved something pleasing.

Bread and butter pickles and a mortar and pestle–thanks, Mary!

A young guy with low-slung jeans was waiting to cross the street as I drove up to the intersection. He started out, saw me, then held up. I motioned him on. At the curb he glanced back, smiled, and waved. I smiled back and shot him the peace sign.

Human by human, peace is sent out, received, and returned. I see it all around me. 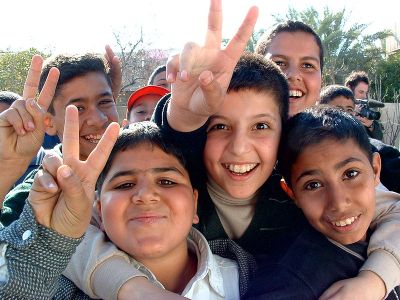 I know an astute, witty, practical nine-year-old who still believes in Santa Claus. She leaves him a letter each Christmas Eve by the candy jar.

Her father says, “She still believes in magic.”

I’m sure she is not alone.

I believe in Santa, too, especially if he looks a little like Robin Williams. (Credit:Jacob Windham on Wikimedia Commons)

Starbucks friend John and I talk about our dogs. In decent weather he brings his boxer Harley and has coffee outside. John and I both aspire to live like a dog—in the moment, not self-absorbed, often overjoyed.

John loves Harley and shows it. Every once in a while I see a news story about horses starving in barns, but, you know, I bet most pet owners are like John. Most of us are this way, right? We make sure our dogs and cats have enough to eat and drink, gush over their eccentricities, and treat them like our children? 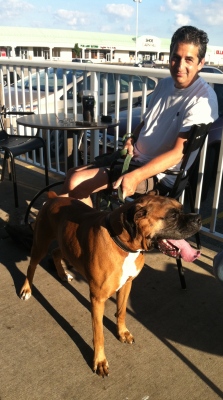 I know I love my dog. This morning old gimpy Watson hopped up on the bed with me as I was getting propped up for prayer-meditation. I’m not sure how much longer he’ll be with us. Like our two cats, Watson came to us as a stray. A clumsy soul, he tore both ACLs years ago. We fixed one, but couldn’t afford surgery for the other. He has fatty tumors on his flank, one the size of a tennis ball. We chase pills down his throat with treats. (I bet lots of you have stories just like this one.)

Not my dog or John’s. A random pooch with an endearing fang I photographed at Presque Isle in Pennsylvania. Certainly the apple of some dog owner’s eye.

I set my Zen bell for twenty minutes, unpropped myself, lay down, and rested my face on Watson’s side. “I love you, buddy,” I said. He huffed and made the old mutt smacking sounds with his mouth I’ve come to love. “I’m glad you stopped by.” I rubbed his soft ear between my fingers. “You’re a good old pal.”

My favorite picture of my old buddy, Watson. Do you have a buddy, too?

The world news tells us our home is in peril, with all of its explosions and arguments. This Christmas, sisters and brothers, I claim for us another world, one I recognize every way I turn. Join me. Everywhere I see souls unable to contain their love and sacred wishes.