“It’s hell being nuts, Pastor,” Ray said over coffee. “I never know who I’m going to wake up to.”

My friend’s mental illness has been lifelong and ferocious. Hardly a day passes without one of his demons exacting misery. As I’ve mentioned in previous reports, we talk on the phone daily, usually more than once. Our conversations skip like records. He craves tobacco. He’s paranoid. He’s confused. Pray for him. 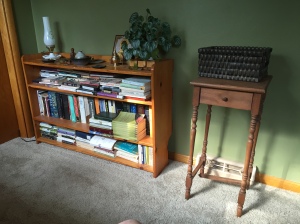 One of my many places for prayer over the years. I think of Ray and plenty of others and sit with what is.

Occasionally he comes out with a revelation. “I never know who I’m going to wake up to.” If anybody else said this, you’d think he was joking about boozy one-night stands, but not Ray. Every day at 8:53 or shortly thereafter, my cell phone rings—or, I should say, quacks. I’ve recently given Ray his own ringtone so that I don’t rush to answer, not out of insensitivity, but realism. He’ll call back in 20 minutes.

Just as he has no idea what his alarm clock will bring, neither can I predict the stability of the voice on the other end of the line.

“I really want to smoke bad this morning, Pastor.” That’s a common complaint.

“Oh, for God’s sake,” I think, “smoke already!” No, I don’t advocate bad habits, but obsessing might be as carcinogenic as tar and as addictive as nicotine. My annoyance doesn’t linger like it used to, though. A deep breath and I’m good again.

Friendship with Ray is an exercise in forbearance, but it comes with rewards, chief among them is that loving him precisely as he is nudges me into loving others as they are and, no kidding, accepting life as it is.

The latest beneficiary of John’s love fest is the Coleman’s foxhound Sherlock Holmes. The facts are these. Sherlock, as I have noted in the past, is loud. If you could hear him carry on when I get home from work, your guts would quiver. Hollering won’t change this. Ignoring him won’t change this. Filet mignon won’t change this.

Now, I can boil over, or I can remember what Ray taught me: You can’t—or, I insist, shouldn’t—train people or dogs to be something that they’re not. That’s pointless and unfair. Either track down what’s lovable or start kicking friends and pets out of your pack.

Obviously I’m not talking about, say, a woman staying with an abusive man because, oh bother, he can’t change. There are limits.

But if your foxhound goes nuts on the way to the dog park, sounding off with his head hanging out the window, you have choices. That is to say, I have choices. 1.) Stop taking Sherlock to the dog park. 2.) Roar shut up until a sore throat sets in. 3.) Bark along with him. Only one of these makes since. Once the spirit takes over, the chats I have with my sleuthhound are almost as instructive as the ones I have with Ray.

Sherlock’s vocabulary is stunted, but adequate. He’s got ruff, whoop and whimper as well as several variations. Wimper is phonetically impaired, but you get the idea. We drive by pedestrians, who grin or go slack jawed. Some must wonder, “Was that driver barking like the dog?” Why, yes, he was. The performance also includes an intimate exchange. “Rah, rah, roo,” Sherlock often says, undoubtedly meaning, “I love you.” So I respond, “Rah, rah, roo, roo.” “I love you, too.” 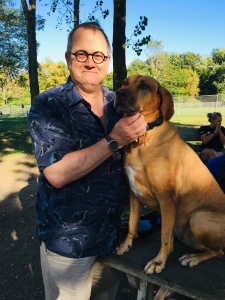 At the dog park with one of my friends, Alpine.

After dashing, frolicking and indiscreet sniffing, he hops in the backseat for the five minutes home. Tired into silence, he who sheds fiercely puts his paws on the console, thrusts his head beside mine and slobbers.

Nobody has ever accused me of being tidy, so my gearshift panel is a commotion of dog hair, dust and coffee stains. Thanks to Sherlock, this dry slurry is now cemented in place by K-9 shellac. The dog has a surplus of spit, especially after playtime, and when he pants, that paddle-shaped tongue flings the slime everywhere.

I could get grouchy, but what’s the use? Scolding will never subdue saliva glands. Neither will admonition make a troubled soul wait until 9:00 a.m. to call.

I have some experience with neuroses, so I can confide in you this blasphemy. Prayer won’t still Sherlock’s thrill of the chase or cure Ray’s ceaseless mind. It’s more blessed, if you ask me, to bay with the dog or answer the phone saying, “So who did you wake up to today? If he’s giving you trouble, let’s talk a while. Then I’ll bend God’s ear for you both.” 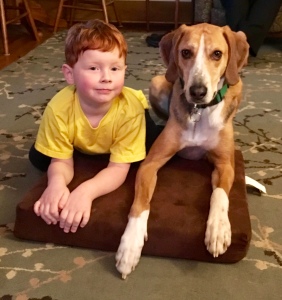 Sherlock Holmes with grandson Cole. And while I’m on a roll, I not a fan of asking children to be something that they’re not, either.

8 thoughts on “A Deep Breath and I’m Good Again”