Thanks for the Christmas Spirit, Uncle Bim

I’m pleased to report that my Christmas spirit arrived ahead of schedule this past Wednesday evening. Lutheran purists discourage Yuletide carols during Advent, but as a neurotic of long standing, I’m used to competing crescendos in my soul. There’s always room for joyful melodies in this pastor’s inn.

Uncle Bim and his wife Mabel

Good old Uncle Bim deserves credit for my cheerful disposition. Over lunch at Greenville’s Stone Arch recently, he gave me some great guidance. That Bim was really something! He died years ago and wasn’t actually a relative, but he reached across bloodlines and granted a stranger quiet joy, which I’ll explain momentarily.

But first, that aforementioned Wednesday evening: I was lounging when Kathy issued a terse statement: “John, I want you to decorate the tree.”

Oh, bother! Hanging ornaments on a plant that’s more porcupine than tree doesn’t make me festive. “Nothing warms me up like blowing steam off a mug of cocoa while selecting another lovely bulb,” I’ve never ever said, “then rummaging through wads of tissue paper for a loose hook.”

In truth, I bear holiday scars. My mother made me string popcorn and cranberries, and for every inch of artistry, I earned one sewing needle prick in the finger. Before that I was assigned to tinsel, which Mom insisted be applied strand by staticky strand. My method of flinging clumps from three paces back wasn’t tolerated.

For love of Kathy I feigned merriment at my assignment. The only thing worse than battling inertia would have been bursting her buoyant Christmas spirit.

As I surveyed the ornaments, Uncle Bim patted my shoulder. Was the fellow whose pinched features I’ve seen only in photographs advising me? “John, look at those faded construction paper ones your kids made. Pick those.”

So I did, and as kindergarten led to third grade and graduations led to grandsons, other handmade treasures revealed themselves. Suddenly it was my turn to be the boss: “Kathleen, I’m putting up mostly the ones people made for us.”

One of daughter Elena’s ornaments, with a smile to hide a missing tooth

Son Micah’s handiwork: “I’m making this for my dad.”

Our plastic tree came alive. Elmer’s Glue showing around an elf’s cheeks and cracks in the gingerbread house were dear, like a child’s milk mustache or crow’s feet when Grandma laughs.

Lifting up beauty after ragtag beauty, I thought of Bim hunched over his own kitchen table. St. John’s friend Bill told me all about his Uncle Bim at the Stone Arch. “Bim used to make crosses out of nut shells and matches,” he said. “He gave two matchstick ones, plus a basket made of old Christmas cards.”

So that’s where the walnut-shell cross in the church office at St. John’s came from! I later found the attribution—Wayne Miller, 1980—scratched in pencil on the back. Bill can’t say where his uncle’s nickname came from, but that basket still abides on his dresser and holds car keys and odds and ends. The old crosses also hang in Bill’s basement, where he retreats from the summer heat. 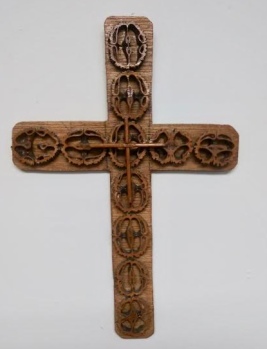 Sad to say, when my own children’s masterpieces graced the family refrigerator, I would have considered Bim’s work “kitsch”—unaccomplished, sentimental. Back then I was neurotic—some things never change—and a snob.

Not anymore. At this time of year in particular, I’m drawn to what is worn thin by human touch or crooked because a halo got bumped while the glue was wet. Thank God, beauty has been patient with this Oniontown beholder.

In blessed memory I kiss hands that held the scissors. From the next room I hear the laughter of a grown son who once thought, “I’m making this for my dad.”

The work of loving hands refuses to be silent. That’s what Uncle Bim helped me to understand. His basket made of season’s greetings and red yarn still says to his nephew, “Hey, Bill, don’t forget about me.”

My late mother’s snowflakes, nothing but starch and thread, whisper, “Remember how I loved you, John.” Other voices from here and beyond join hers.

Tonight I’ll recognize them all while praying in the light of our tree. “I love you, too, Mom,” I’ll think. “I love all of you. I wish we could be together again right now.”

My mother’s starch and thread

But I’ll be quiet, look at the ornaments up close and receive the Christmas spirit—which is to say, wipe away tears.

5 thoughts on “Oniontown Pastoral: Thanks for the Christmas Spirit, Uncle Bim”