What I Do Is Redd Up

I want to be home by 3:00 this afternoon. A cluttered living room waits for me, as does an unmade bed and a kitchen that needs to be, as my mother used to say, redd up. In other words, the house requires attention before wife Kathy shows up at 6:00 p.m. with grandsons Cole and Killian in tow. For a couple of hours, we’ll act as spotters to boys who are constantly, gleefully careening toward a concussion. By the time daughter Elena picks them up, dirty dishes will have returned, and planes, trains and pterodactyls will be scattered everywhere, waiting for me to step on them and shout bad words. Clean up, mess up, repeat.

The person in charge of squalor control and hygiene restoration used to be called a housewife, an impoverished term to my ears. A job that involves cleaning, cooking and often child rearing deserves a more worthy title. Nobody is married to a house, nor does one’s marital status constitute a vocation.

But homemaker is a good fit. Creation is involved, as is purpose. A house isn’t a home until people related by blood or blessed ties find nurturing shelter there. Such a place can be ramshackle or palatial as long as at least one heart beats affection into the cupboards and windowsills.

Plenty of homes thrive without full-time tending, of course. Whoever can keep a house presentable, prepare healthy meals, do laundry, give children the attention they need and put shoulder to the wheel forty hours every week for a paycheck deserves credit. Props, bows and curtsies to them all, especially to those who have no choice.

That emphatically said, I have a soft spot for careers given to home and family. My mother spent much of her life that way. Dolly Coleman worked part-time at what she called the budget bakery and at the Boston Store, for decades the crown jewel of downtown Erie, but her identity was grounded in motherhood.

On the back of a well-worn cookbook . . . a housewife, perhaps?

My only reservation about Mom’s vocational history is the possibility that, like countless sisters of her generation, she was disheartened by a society that patronized women and kicked their intelligence to the curb. Housewife bore an implied prefix: just a.

Kathy went back and forth with staying at home and taking jobs. Regardless, she gave Elena and our son Micah amazing childhoods. Some parents can’t keep up with their kids, but my beloved had the distinction of outpacing her offspring. Never much for napping, Kathy was mistress of over-the-top fun, constructing cornstalk mazes in the backyard, going to legendary pains with Halloween decorations and building snow forts ad infinitum. She pouted when the kids weren’t game for the expeditions she cooked up.

A fidget blanket made by Elena Thompson, to calm the restless hands of a dementia patient

As it happened, one of our little acorns didn’t fall far from the oak. Elena and husband Matt decided that their issue were to be raised by a mother who would fill their days with joy and adventure. Capable though she is of employment, our talented daughter has been building a cottage industry of weighted and fidget blankets. Her household speaks of shalom, and her handiwork gives sleep to restless children and calm to dementia patients. Call Elena what you will, but don’t dare start off with just a.

A couple of years ago when I accepted a part-time call to serve St. John’s Lutheran Church in Oniontown, Pennsylvania, it was with the promise of writing time and the expectation that Pastor Coleman would lean into housework.

I know better than to call myself a homemaker. That profession—paid only with emotional currency—is broader in scope and deeper in sacrifice than I can manage. What I do is redd up. Ministry and writing are passions, but home duty now completes my vocational trinity. 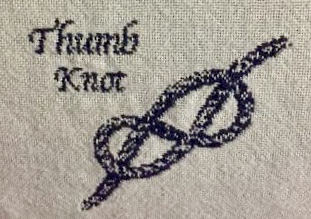 Detail from Kathy’s throw on the couch

My job description has gradually written itself on my heart. 402 Parkway Drive should be presentable when Kathy gets home after eight hours of treating cancer patients. Why? Because she deserves a sanctuary: tidy counters, her throw—adorned with representations of sailing knots—draped neatly over the back of the couch, minutiae that threatens to take over the dining room table put away. Stepping across the threshold, she should drink from a cup running over with peace. She shouldn’t worry about dinner. She should leave the dishes to me.

The reason for my efforts, modest though they are, is love. Redding up is a gift. I’m no homemaker, but after thirty-five years with Kathy I’ve decided, against all logic, that being called her househusband would suit me just fine.