Layla is a lunk—there’s no other way to put it. She is eighty akimbo pounds of yellow Lab who bounds onto your lap and noses her way past your face and into your soul. My grand-dog is frantic with affection.

Since April Fools’ Day, when our second grandson Killian was born, wife Kathy and I have been dog-sitting. Daughter Elena and son-in-law Matt are rightly afraid that Layla might lick the skin off our newborn’s hide, accidentally trample grandson one, toddler Cole, or bowl over Matt, who recently broke his leg. So with the exception of a couple of trips home for good behavior, Layla has lodged at the Coleman house. 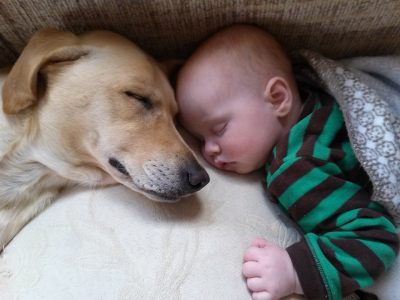 Layla and Cole when the latter was one year old

Last night she flopped beside me in front of the television, spent after a day of urgent missions only she understood. I ran my hand over her closed eyes and soft ears and said, “You’re Pop’s good pup, aren’t you? You’re a good girl.”

She was at ease, but nobody can bliss her out like Matt. And if any dog needs some bliss, it’s Layla. All it takes to reduce her to hours of trembling is a balloon. A couple weeks ago Kathy and Cole were in the basement popping leftover birthday balloons, probably a dozen of them. Later I found Layla in our mudroom, quivering and cowering.

Lots of dogs get panicky on July 4th, but why would loud pops unhinge a pup for a whole day? That’s how long it sometimes takes for Layla to stop shaking.

We’re pretty sure of the answer. On August 19, 2013, her owner, Dean Haggerty, was shot to death in his Summit Township mobile home. Dean’s daughter and son were there, as was Layla. Dean’s fiancé Kristina had pulled the trigger.

As one of Dean’s childhood friends, Matt gathered with the Haggerty family. The dust hadn’t even begun to settle. What exactly happened? Good Lord, the kids! And, oh yeah, what about the dog?

One room can contain only so much shock and uncertainty. Numb silence. Could anyone take in Layla? More silence.

Matt hadn’t seen much of Dean in the months before the shooting and had never laid eyes on Layla. But when he realized that his dead buddy’s dog might be homeless, Matt’s yes came out by its own volition. He hadn’t consulted Elena, who was seven months pregnant with Cole, or thought things through. In that moment, his love was like Layla’s, reckless and snout-first.

How old was Layla? Nobody knew, but she was clearly in the mad dash of puppyhood. That first night with Matt and Elena, she paced and whimpered. In the small hours of the morning, she finally fell asleep on the couch at Matt’s feet.

Over the last couple of years, Layla has become family. Early on, she ducked when I reached out to pet her. Was she fearful by nature or treated harshly? Again, nobody knew.

Today, Layla doesn’t look over her shoulder much. Family and friends have nosed into her vulnerable spirit and earned her trust. If the world would quit popping, her peace would be complete.

Layla must be at least four, but she hasn’t received the memo that she’s not a puppy anymore. The relentless K-9 energy sparking in Matt and Elena’s house can be overwhelming. When visitors get welcomed within an inch of their lives, Elena makes fists, squeezes her eyes shut, growls “Layla,” and then laughs and shakes her head. Charged with minding a toddler, an infant, a temporarily gimping husband, and a joyfully insane Lab, Elena deserves sainthood.

And Layla deserves her home and most of all Matt, a patient, insightful man. When she pins him down with kisses and army-crawls into his soul, he welcomes her in.

I never realized how much Layla loves Matt until recently. Pop will do in a pinch, but only one lap is home. Before family dinner one evening, Matt sat in my recliner, his cast resting on a pillow. Layla climbed aboard and settled in.

She hadn’t seen her master in two weeks and was finally home. No gunshots. Just a goofy dog and a man who said yes.

I couldn’t help taking pictures. Such good feels. Honest stories have flawed endings. Friends die. Balloons explode. But once in a while a last page sings out the possibilities of reckless love. It convinced Layla that she’s a good girl, and maybe, one dog and human at a time, it can also heal the world.