Only at the end of Cecilia Capuzzi Simon’s New York Times essay “Why Writers Love to Hate the M.F.A.” did the truth hit me. 2015 marks the thirtieth anniversary of my M.A. from the Writing Seminars at Johns Hopkins University. The program was one year long at that time, and I spent one semester studying under John Barth and the other under Doris Grumbach. I also finessed my way into Elizabeth Spires’ undergraduate poetry workshop. 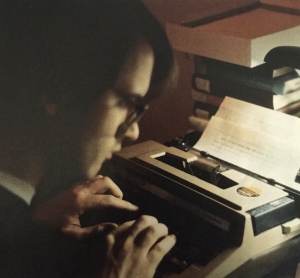 A twenty-three-year-old punk types out a draft at his desk in Baltimore.

I held up the rear of the mid-pack, turning out short stories and poems that were neither embarrassing nor accomplished. Actually, I was probably of most value as a critic, giving every manuscript an energetic round of copy editing and a lengthy summary comment. The greatest compliment I received at Hopkins came from one classmate who has gone on to nonfiction notoriety: “I always pay attention to your comments.”

But I was out of my league, and the nine months wife Kathy and I spent in Baltimore was a mostly unmerited privilege. My fellow fictionists came from Harvard, Yale, Sarah Lawrence, and so on. One already had his Ph.D., and another received a perfect score on the verbal section of Graduate Record Exam. One who has since gone on to glory was married to the actress who played Quincy’s (Jack Klugman) wife on television. One fought in Vietnam. So we’re talking smart, interesting people. And the alumni are distinguished: Frederick Barthelme, Louise Erdrich, Martha Grimes, Molly Peacock, John Barth himself, et. al.

I graduated from Penn State-Erie and scored in the 26th percentile on the GRE literature section. How the hell did I sneak in? I perched on the waiting list for some weeks, so at least a few applicants said “no, thanks” before my acceptance letter landed.

I appreciate the reservations some writers and scholars have about M.F.A.s and M.A.s. Capuzzi Simon points out the objections that tuition is steep and teaching opportunities—for those who want to pay the bills that way—are scarce compared to the number of graduates. And even in the mid 1980s harrumphs circulated about the gush of monochromatic work coming from apprentice writers who nurtured voice and vision in at best a comfortable terrarium and at worst a snarky thunderdome.

My experience from September 1984 through May 1985 was in equal measure stressful and magnificent. The former was my fault. My lungs got punished by Vantage 100s, and I lost thirty pounds in my first two months. A little Zoloft would have helped. As I settled in, though, Kathy and I found C. C. Carry Out egg rolls one block away and the Graduate Club in the basement of our apartment building, an old hotel probably grand in its day. On Hump Night, dime Rolling Rock ponies washed down chicken fingers. Some weight returned. Gradually I understood my place and relaxed enough to avoid a nervous breakdown.

And I learned. Jack Barth—yes, we called him Jack—was more skillful and generous than I can say. He was much concerned with story-telling technique. If you’re going to tell stories, you ought to know what’s under the hood, as it were. When your story was up for the workshop, you met with Jack for thirty minutes in the days beforehand for a private conference. I’ve said many times that my hour and a half with Jack Barth was worth the tuition. How astute he was, reading my young work and discerning what I most needed to hear at that moment to grow and develop—and not a hint of annoyance at my ignorance.

Doris Grumbach established a rule during her first appearance at the helm: criticize what you will, but the subject matter of the story or chapter is off limits. I appreciated this, since my stuff was about the mundane lives of blue-collar sorts from the rust belt. It was all I had. In her teaching, she emphasized the importance of line-by-line attention to our prose. In one session we compared an original Raymond Carver short story with a revision that appeared in a later collection. The late minimalist made but a handful of minor changes, and we dissected each one. The point: if you’re going to be serious about writing, every pen stroke matters, so pay attention. Doris also invited the fiction workshop to her row house on Capital Hill and let us have a look at her carriage house study. For years thereafter I longed for such a sprawling, dignified space for my desk.

When Kathy and I drove back north to Erie, Pennsylvania, with my M.A. in hand, we moved into an attic apartment in a sketchy part of town. I set up shop in a 4’ x 4’ turret and, oddly, turned out poems. I’ve now written dozens of them, as well as scores of essays and a couple of books about spirituality and religion and one memoir—but never another short story. The poetry I generated for Beth Spires’ workshops was eh, and she did me the great favor of treating my work with respect and care without ever giving me reason to dream big.

Still, verse took hold of me. Over the next five years I got my work into a handful of solid literary magazines and bet I would have eventually published a collection. In the late 1980s I squeezed in the nervous breakdown I put off in Baltimore.

Though I haven’t completed a poem or story for going on two decades, Hopkins still shines in my memory. Thirty years ago this month I typed the final copy of my thesis, a collection called Senior League. I drafted longhand and moved to a little Smith Corona electric for revision and submission. In the turret, it was poems put down on an 8.5” by 14” yellow tablet, followed by typing when things got serious. For a while, when I taught English at Penn State-Erie, Kathy and I lived in a freezing farmhouse. Steam rose from our knees when we bathed. My study was tucked under a set of steps. Revisions got pounded out on a rickety old manual; the print quality was about as good as the poetry. Eventually faculty members received IBM computers with a blessed, crappy, postcard-sized screen, and I started composing on the keyboard.

I mention these details to demonstrate that writing changed for me at Hopkins. It became something I sat down and did, scribbling or clacking or clicking, whether I was in the mood or not, whether I had anything to say or not. I showed up in Baltimore in 1984 to study writing. When I left in 1985, for good or ill, I was a writer. Why? I had seen what committing to a craft looked like, received guidance from masters, and spent time with peers on their own pilgrimage. In all this I learned a simple fact: writers sit or stand or recline, get out a pen and paper or prop a keyboard on their laps, and bloody well write. And they spend far more time writing than talking about writing or figuring out what clothes an author should wear. Thomas Merton wrote, “What I wear is pants.” Amen. Oh and if writers aren’t gluttonous readers, something is amiss.

One thing I didn’t learn at Hopkins was what I ought to write about. That was a good thing. As I’ve shown up at my writing desks and waited for words to find me, I’ve also been figuring out what’s worth saying at all. Cecilia Capuzzi Simon summarizes a common objection to the M.F.A.: “Detractors . . . say the degree is responsible for so-called program fiction—homogenized, over-workshopped writing void of literary tradition and overly influenced by the mostly upper- and middle-class values and experiences of its students.” Poetry workshops could be guilty of the same charges.

In fact, you could accuse plenty of graduate programs of over-workshopping students. In addition to an M.A., I have a Master of Divinity and a year of Ph.D. studies (a twenty-page paper on Sir Thomas Browne’s Urn Burial was enough to show me that a literature doctorate wasn’t for me) on the old curriculum vita, and each excellent, soul-shaping experience left its distinctive perfume—or stink, as I’ve occasionally said—on my thinking. I left Hopkins writing stories with nearly invisible endings. Twelve months at Indiana University of Pennsylvania was exhilarating, but nearly turned me into a Marxist. And Trinity Lutheran Seminary cracked me open and called me to believe like a grown up. In each case, over time, lessons that held up got integrated and those that didn’t got left beside the road.

The point: during grad school I immersed myself in the ideas being presented, welcomed them, lived with them, sometimes championed them. Sure, I got homogenized, but only for a while. Eventually my brain and identity returned. And isn’t this the educational experience: binge on learning, figure out what’s crap later, and grow?

When I was at Hopkins, I wrote about white, lower-middle-class folks whose lives were going nowhere. The resolution to my minimal conflicts was the moment when the reader understood that my characters were hopelessly stuck, even if they were oblivious. After covering the same territory in verse for a few years, I took up panic attacks, which led me in a direction I would have sniffed at in Baltimore: spirituality, and now, creative non-fiction that my younger self would have regarded as maudlin or trite.

In short, Hopkins was a critical stop on a thirty-year writing trip, but it was only one stop. Barth, Grumbach, and Spires were mentors, but so earlier on were Diana Hume George, J. Madison Davis, and the late Chet Wolford, who taught me to be merciless with a manuscript. I’m indebted to all of these guides, but none of them could help me with the most important questions to answer: What do I have to say? And what’s worth saying at all?

Here I admit a prejudice: if an M.F.A. graduate’s top answer to these questions ends up being, “Publish me!” then, well, yuck. Without something pressing to say, a writer produces literary hothouse tomatoes. And if M.F.A.s aren’t asking themselves about meaning and purpose each time they invoke the Muse, their degree isn’t to blame. Go ahead and throw a tomato at me, but I say the problem is poverty of artistic soul. Maybe this is an errant position.

Forgive. These are only the impressions of a middle-aged M.A. who, in the words of literary critic Anis Shivani, “[did] a degree” and nevertheless has been “condemned to obscurity.” Would I jamb a Chevette full of essentials and drive with my young wife from Erie to Baltimore all over again?

C. C.’s egg rolls weren’t this crispy. They were a little soggy, in fact, but Kathy and I ate a hundred or more doused in soy or duck sauce. (Credit: Albert Cahalan on Wikimedia Commons)

You bet. Objections to graduate writing programs don’t factor in the need for those Jack Barth called “advanced apprentices” to get the hell out their own particular Dodges, drink and spar with classmates whose names they can’t forget, gather up the tricks of the trade, find a great egg roll, and rinse down memorable chicken fingers with Rolling Rock.

I learned from Jack about Chekov’s Gun: never hang a pistol (or egg roll, chicken finger, or Rolling Rock) on the wall in the first act without firing it by the third.