In the early 1970s writer May Sarton moved from her beloved home in Nelson, New Hampshire, to The House by the Sea (her journal of those days). Like some lucky pilgrims, Sarton had ample time to make her move. “I had two years in which to dream myself into the change,” she writes, “sell Nelson, and pull up roots.”

Kathy and I are in the process of dreaming ourselves not into a spacious home on the coast of Maine, but into a 1,000 square foot house on Erie, Pennsylvania’s east side. Our zip code will go up six digits, but our space will shrink by over half. Downsizing, we’re calling it. We closed on the place a few days ago, but we’ve been picturing what will go where and what will disappear. Kathy is lobbying for an ambitious kitchen remodel; I’m smiling at the corner on the enclosed front porch where my desk and prayer/meditation chair will squat; both of us are imagining.

A little light in the hallway–just enough

Last evening I said, “You know, we’re going to have to get used to the loss of space and no upstairs.” Kathy agreed, and as I’ve wandered about, distances seem abbreviated. I’m not concerned, though. The rooms are already endearing themselves to me, mainly because I see signs of the former owners everywhere. I’m guessing the husband and wife–the latter perhaps passing recently, the former having departed some years ago–were my parents age, born in the 1920s, shaped by the Great Depression and forged by World War II. Admittedly, all of this is guesswork.

I’ve been calling our new home, which the former owners purchased in 1949, an old lady house. She and her husband could easily have been curmudgeonly and strange, but signs of their thrift and good stewardship have me thinking they were upright folk. He–I’ll name him Ernest–nailed lids to the basement studs and kept screws and nuts in jars twisted secure. He also recycled cabinets, lining them up and keeping, what, half-used cans of paint and turpentine inside. One door near Ernest’s workbench was set up for a padlock, and a mirror strategically angled so he could see who was coming down the steps makes me wonder if he liked to keep a bottle of Gibson’s 8 handy for a secret pick-me-up on boring afternoons. 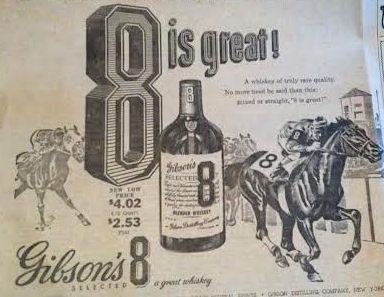 Is this what Ernest kept locked up?

Ernest didn’t have to venture more than five feet from his workbench if the “great whiskey” got to be too much for him.

She–Arlouine, let’s say–kept the well-worn carpets vacuumed. Grab bars in the bathroom suggest she tried to stay in her home as long as possible? But eventually raised toilet seats don’t help much. I imagine her, thin and brittle with iron gray hair, propped up in a nursing home bed, staring into the distance. Was she a fearful soul? I ask only because of something odd left behind in a hall closet.

So Arlouine was Roman Catholic. (We Lutherans don’t go in for Holy Water, our idea being that God has blessed that life source far above our poor power to add or detract.) For a couple days I laughed at the idea of Holy Water in a spray bottle, but Starbucks friend Sean, also a Catholic, gave me a compassionate nudge, probably without realizing it. I don’t remember his exact waords, but when I showed him the photograph he acknowledged the old practice of keeping Holy Water around the house. His take was kind, though, along the lines of “sometimes you’ll try anything that might help.” Point taken. Our fears hide in plain sight, like cobwebs near the ceiling or rust in the medicine cabinet; a spray of blessed water can do no harm.

Arlouine and Ernest’s bedrooms have tile that is so ugly it’s kind of charming.

I’m not sure what all those tile plants are, but they look to be in pain.

Besides the Holy Water, the best find in the old lady house is the newspaper under the tile. I lifted up a corner to be sure the floors are hardwood–yes!–and found The Erie Daily Times (Night Final) dated November 8, 1949. My own parents’ firstborn, Cathy, was not yet a year old. Mom and Dad are both gone now, and my sister can retire any time she is ready.

Liquors, a Hammond, and Hazel Lowry’s smooth vocals: 1949 Erie, Pennsylvania, at its most refined

Oh, Arlouine and Ernest! You put that paper down sixty-five years ago, a prudent layer between the tile and wood. I’ll grant you, there’s no pressing need to update that flooring. Of course, Kathy and I will refinish the hardwood, probably put down a faux Persian rug, something tasteful. If I’m the one who slices your old drab leaves down to trash-bag size with a drywall blade, part of me won’t be happy. 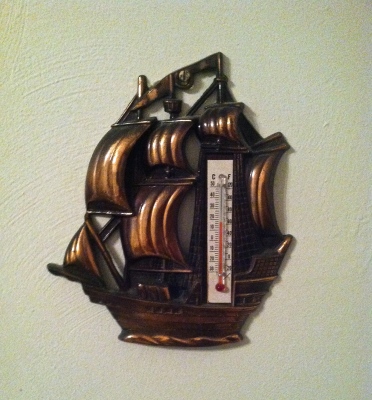 Possibly more thermometers than electrical outlets in our new home; maybe Kathy and I will keep this one to remind us of Arlouine, Ernest, and all those who have sailed on to glory.

I believe your way is for the best and will try to remember it as I dream my way into your home: Be sure to finish those leftovers. Put that old metal table in the basement and fold laundry on it. Don’t pull up perfectly good tile. And–I confess it makes sense–keep Holy Water in a spray bottle. A mist is more than enough.

Tabernacle for the Holy Water; all woodwork in the house is like this

9 thoughts on “Dreaming My Way into an Old Lady House”