I was getting cherry tomatoes from the basement freezer to make marinara sauce when I remembered a karmic coincidence. It happened a few years ago and was so unlikely and sacred that I took the bizarre step of freezing the evidence—a dead Swainson’s (or olive-backed) thrush. 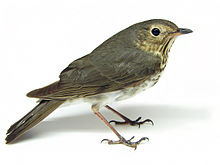 I first wrote about this handful-of-a bird a couple years ago while on a train to Florida to visit my dad and step-mother, both of whom were in an Edvard-Munch-spiral of dementia:

Edvard Munch’s “The Scream,” 1893. Can a serious painting be a cliche for despair? Maybe, but it fits. (Credit: Wikipedia)

“The lights have gone off and engine and ventilation moans have stopped. As the Silver Meteor sleeps for what we’re told will be fifteen minutes, I remember Swainson’s thrush. Named after 19th century ornithologist William Swainson, the thrush takes numerous micro-naps during the day, each of just a few seconds, according to hras.org—like naps on the train. Passengers nod off for a minute, until the car jerks or somebody walks by and brushes against them or a grizzly old guy hacks cave breath from one seat back to their nose—my present situation. Then they strain their eyes open a slice, shift position, and nap again.

Please! Nobody, woman or man, looked this together on the train from Pittsburgh to Orlando. We were all visual renderings of halitosis. (Credit: corbisimages.com)

“Sometimes I myself check things out with one eye because the annoyance isn’t worth the effort of pulling both open. In this I imitate Swainson’s thrush. Saul Scheinbach describes the nifty mental trick this bird and others use to sleep and prevent getting eaten at the same time:

“’Scientists found that when the birds were in a migratory state, they reversed their activity cycle, resting during the day and becoming active at night. As a result daytime ‘drowsiness’ (eyes partially closed) increased, but total sleep time dropped by 67% as compared to birds in the non-migratory state. To partially compensate for this sleep loss migratory birds took daytime micro-naps with one or both eyes closed. These episodes occurred during periods of drowsiness and lasted about eight seconds each. The team suspected that unilateral eye closure (UEC) during the micro-naps allowed one brain hemisphere to sleep while the other stayed awake to avoid predation.’ 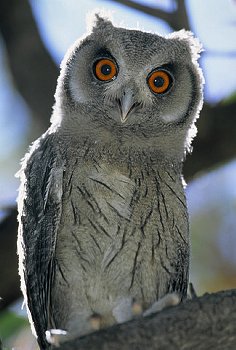 “Scheinbach goes on to report that the research team referred to here went on to prove their suspicions true and adds tongue-in-cheek speculation: ‘UEC has also been observed in ducks, whales and dolphins, indicating it may be more widespread across the animal kingdom. Perhaps humans exhibit some form of UEC too. I recommend testing college students during exam time and security guards at night.’” Har har.

The mission to Florida, via Amtrak for fear of flying, failed. My father and step-mother refused to move into assisted living. To their neighbors’ dismay, they hunkered down in their Bastille of anguish and confusion for several more months. The trip’s only grace was long stretches of writing on the train and dozens of naps taken like a migratory animal.

Back in Erie, bummed about such a dreary use of vacation time, I showed up at the church and found what looked like a Swainson’s thrush lying dead on the sidewalk. I imagined it flew into the glass door and fell into my path. It was perfect, as if it had taken a macro-nap until I arrived. What were the odds? A sage bird I read and wrote about but never met lay before me in repose. I’m not much for signs, but I know a wonder—albeit a dark one—when I see it. 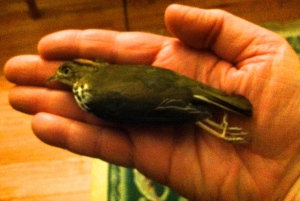 So I picked the thrush up, wrapped it in napkins until I got home, and froze it in two sandwich bags. True, keeping a tiny cadaver in your freezer is morbid, gross, weird, whatever, but I wanted to hang onto Swainson’s thrush. We had a conversation pending, but after watching my dad flail about in dementia’s white caps and refusing rescue, I had no shamatha left to imagine what a dead bird might say to me.

My shamatha may not be functioning any better than when I stepped off the Silver Meteor all those months ago, but lately gifts have landed in my path, both quick and dead, and I suspect they’re in formation with Swainson’s thrush. Just now I reached into the basement freezer and returned to the dining room table. Again I laid napkins down and took hold of the body, this time expecting freezer burn. But no. Its wings have darkened, but otherwise it looks the same as the morning I found it.

Had the thrush offered itself to me? Ah, a trite thought, spiritual kitsch. But regardless of her intent, she’s been teaching me. If you can’t nap for an hour, take thirty minutes. Too busy for twenty minutes of prayer? Do ten? Savor three bites rather than swallow ten whole. A truckload isn’t preferable to a teaspoon.

In fact, as one who takes in everything from memoirs to avocados to Starbucks coffee way too fast and in embarrassing quantities, I believe Swainson’s thrush may be trying to lengthen my days. Receive staples, luxuries, and blessings in small portions, you middle-aged glutton!

I’m breathing, listening for this frozen bird’s song. (Lord, help me.) Micro-graces have been appearing, and fortunately I’ve had one eye opened to notice them. They’re all singing to me mercy within mercy within mercy.

Neighbor Patrick, Shenley Drive’s Down’s-syndrome sage, just turned twelve, but his boy-wisdom isn’t getting all mature, fussy, and sophisticated. He lives in a relentless now; I wonder if what the world regards as a deficiency is really an absence of intellectual clutter and absurdity. He does his best to teach the neighborhood. Sometimes we pay attention. 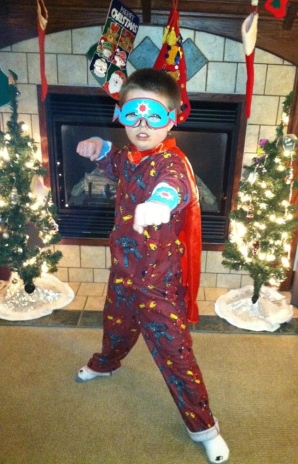 Friend Mary posted the following on her Facebook page: Foster & Help Needed! “Noel–The Christmas Kitten”: This little kitty was found tonight after she crawled up through a heating vent into a house in Millcreek. We assume she went in to try to keep warm. She is very sweet, and just wants to be held and cuddled. As you can see, she is emaciated and obviously has been on her own for some time. Orphan Angels Cat Sanctuary and Adoption Center will be overseeing her care, and a vet appointment has been made for her first thing in the morning. She needs a good foster home until she can get strong enough to be ready for adoption. Orphan Angels could also use donations for this little one. This case was unexpected, but they want to make sure she gets the help and care she needs. Anyone interested in fostering, please call Eileen at 814-504-3246 to be screened. Donations can be made via paypal on the OA website: http://orphanangels.weebly.com/.

Mary and husband Mike agreed to take Noel in, knowing she’d need a couple months of care before a permanent adoption would be possible. Noel didn’t survive, though. Mary writes, “I am at least grateful she had warmth, food and love in her last days.” And I’m grateful for friends’ yes to one of my frozen thrush’s forgotten sisters. Mary and Mike quietly hugged the world.

This Christmas week my brother Ed asked if I had our Grandma Miller’s molasses cookie recipe. He made some on his own and said they were hockey pucks. We looked in a family cookbook without luck. In passing he also mentioned that Gram made a batch of those cookies once a week because Earl (Gramp) loved them. This hardly seems worth sharing, but the idea has stayed with me, especially since Gram’s body was gnarled with arthritis. Her cherubic face was always pursed with pain. “So much depends upon a red wheelbarrow,” William Carlos Williams wrote. Correct. A red wheelbarrow and a molasses cookie.

Also this week, parishioner Bob and his grandson Gabe stopped by the church to do some cleaning. When they came into my office, I crouched down and said to Gabe, “Hey, you got a hug for Pastor John?” He smiled and let me have it. For him it must have been like hugging a sequoia. For me it was one regulation clergy hug—until I tried to pull away. Gabe hadn’t gotten the memo that this was to be a micro-embrace. A Swainson’s thrush-preschooler passed his goofball minister a universe of grace without realizing it.

When an olive-backed bird is your mentor, even a fart can be a blessing. Yes, you heard me: a fart. (Roll the r. It’s more fun that way.) Friend Abby recently shared this laugh on Facebook:

Me: Hah! That was quite a toot!

Me: It wasn’t? Sure sounded like one to me! What was it then? A fluff? A fart? Did you shoot a bunny?

Keenan: No momma. None of those. My butt blew you a kiss.

I accept Abby’s word (If I’m lyin, I’m dyin!) that Keenan came up with his own version of the scene in Chaucer’s The Miller’s Tale in which Nicholaus “anon let flee a fart.” In the heart a four-year-old boy, such a kiss is precious, not to be wasted. The point: I need Swainson’s thrush’s strangest song to make me laugh and drag me out of the terrible squirrel cage of self .

Sniff. Oh, that was supposed to be a kiss. Why, thank you. (Credit: Lars-Olof Johansson)

Because my olive-drab bodhisattva hasn’t finished saving me yet, I’ve returned her to the morgue. Such power! Even frozen she sings to me: “Creation screams and groans, but shh. Do you hear the descants of grace and mercy?”

A bodhisattva with many wings. (Credit: Nat Krause)