The shelter for my naps this week has been the Ark, though nap is too humble a word for what I’ve been up to. Occasionally what Winston Churchill called the blessed oblivion of midday is luxurious. Your body lets you know that something sacred is happening. Muscles are slack, breaths are leisurely and full, the mind is gloriously untroubled.

Naps of biblical proportions rarely unfurl before me at home. Most often I’m on retreat at a monastery or, as is the case now, at summer church camp with teenagers. My cabin is named after Noah’s eccentric craft, and I lucked into a room by myself.

“You don’t need to get up,” I’ve thought four out of the past five days. “You’ve no place to be. Rest. Just rest.” So I have. Waking slowly after two hours, my soul feels like it has received a massage.

My fellow pastors and I have chatted here and there about naps. Some of us indulge only with guilt. My own second thoughts are years in the rearview mirror, but I understand the reservations. Time is costly, lists are long. Besides, we’ll all get plenty of sleep post-mortem.

Pastor Erik has a Jewish friend who once gave him two syllables of wise instruction on taking a siesta: mitzvah, which is, in the generic words of Google, “a good deed done from religious duty.” Millions the world over can’t take naps, their burdens being onerous, or bombs and bullets firing adrenaline through their veins. Receiving a taste of Shabbat each day does less fortunate brothers and sisters an honor. So nap gratefully. Take the oppressed and weary with you in spirit.

For a decade or so I napped not out of devotion, but necessity. Unable to cope with troubles keenly targeted at my neuroses and vulnerabilities, I slid under the covers each afternoon and disappeared for as long as possible. Siestas were my salvation.

Path to the Ark

Thank God, the rest awaiting me soon won’t be urgent. The Ark may be silent, or clergy friends might be on the porch, their tales and repartee floating through my open window. I might nod off or not–whatever.

Actually, a couple of times during oblivion, my consciousness has risen to the surface for prayer. Love may be the reason.

Not every kid who attends church camp frolics in the woods, eagerly sings around the fire, and flops into a squeaky bunk and immediately gathers REMs. Each summer a few troubled hearts sulk on the periphery, their eyes tired, far away. I have fifteen summers of them gathered up in my memory.

When the Fourth Commandment comes along, at least one kid’s eyes water up—never fails. “Will God forgive me if I can’t honor my father and mother?” A few years ago I took the liberty of giving a silly-hearted girl a new commandment: “Kiddo, I bet God would be happy if you just loved yourself. How about if you honor yourself for now?” Then I said I would take her as my daughter any day.

Outside the window by my cafeteria table, campers line up to get their medications. Seems like our world practically insists that all of us, young and old, fret and obsess ad infinitum. One chunky boy from a dozen years ago comes to mind. His days were fine, with counselors keeping the teens in constant motion, but dusk thundered with the approach of homesickness and insomnia.

And camp week never passes without some half-pints walking alone, sitting alone, directing praise and blame to the empty space around them.

But I listen—to the lovely runts of our church camp litter, to those who think of nothing but home, especially to those who lug heartbreaking secrets in their knapsacks.

I love all the kids, but the ones whose tears are always close to the surface look at me as I pray, and I look back.

Not so long ago each mid-day I slept in a nave built for one, but this week guests have arrived. Their presence has been a duty-free mitzvah. 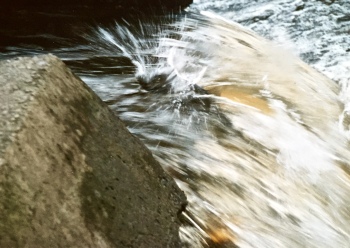 For some of us runts, life can include lots of swimming upstream. (Credit: Kathleen Coleman)

Thirty years ago panic attacks brought me to my knees. And I still remember the day in fifth grade when my mother met me at the door after school to say that my father was at the courthouse applying for a divorce. As a teenager, surrounded by love, I fell asleep aching with confusion. In other words, I’ve been a runt myself off and on from the beginning. I relate.

So this summer’s campers are welcome to join those from years past and visit my spirit at nap time. My sanctuary has room for them now. I ask God to dry their tears, make them feel at home, and say into the ear of their hearts, “You are loved. Don’t forget.”

Elena a couple weeks ago

“Who would have ever thought we would get to this day and that it would be so joyful?” wife Kathy said from the kitchen doorway. Her question embraced me so completely that I didn’t even say goodbye. I just stood there in the quiet, mixing up Greek potato salad, my contribution to daughter Elena’s baby shower.

Well-meaning friends tell you that your teenage kids will outgrow their problems and turn out fine, but, of course, sometimes they don’t. Everybody knows this, but when you have good cause to wonder whether your daughter or son will live to see legal drinking age, folks who love you want to offer hope. I don’t blame them. When Elena was a Goth chick carving LOVE and HATE into her wrist, disappearing in the middle of winter nights, and gobbling a cocktail of pills, I knew enough to translate all words of comfort. “I love you,” was the real message. “I see what you’re going through. Don’t lose heart.” I never came close to giving up on Elena, but I never let myself wander far from the truth, either. When you attempt suicide as a way of calling out for help, you might die. Happens all the time. When you sneak out at 3:00 a.m. to trek across town through slush to a creepy boyfriend’s house, you might get hurt in ways you can’t yet imagine.

As Kathy stood in the doorway, I’m sure she was remembering those four or five years when worry about Elena constantly had us by the throat: “Who would have ever thought we would get to this day and that it would be so joyful?”

Go ahead, tell me this old sanctuary doesn’t glow!

When the Greek potato salad was ready, I took it to the church fellowship hall, which Elena, Kathy, and a herd of helpers had decorated within an inch of its life. I’d led hundreds of worship services in that hall, formerly the Abiding Hope Lutheran Church sanctuary, but never have I seen that simple Cracker Jack box room glow more than it did when I put my bowl on the buffet table and stood still as if in a dream.

If all goes well Kathy and I will be grandparents toward the end of November. Holding my grandson for the first time, I may think, “Who would have ever thought . . . ?” After what the Coleman family went through when both Elena and son Micah were teenagers, I regard every joy as a miracle—Kilimanjaro balanced on the head of a pin. Witness the wonder through tears, but, baby, don’t forget it could tip over.

While Elena, her husband Matt, and our future grandson seem solidly on the path to okayness, Micah also has Kathy and me saying, “Who would have ever thought . . . ?”  When he was going through his wall-smashing, heroin-shooting days, Kathy and I questioned whether he or we would make it to joyful. Now, not only did he report this morning to his full-time painting job with snot-jammed sinuses, but he’s been going over to his grandmother’s house lately. He who once stuck with a job a couple months at best enjoys helping her with chores and hanging out with her, watching movies and kibitzing. He’s been clean well over a year and is about to turn in his 401(k) paperwork. Somebody pinch me!

An old volcano dances on a pin: that’s the Zen half-smile I took with me into the Pastor’s Study as the ladies ate, laughed, and whooped for a couple of hours in the glowing fellowship hall. I put my mats, blanket, and pillows on the floor and took a delicious, mediocre nap. A couple text messages joined with laughter forte to hold me on the edge of sleep. No matter. When I got up and checked on the party, nothing had tipped over. 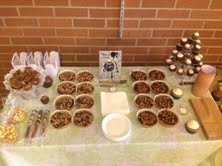 Dear Lord, Join me for a turtle brownie? Amen

For me, shamatha—calm abiding—in the presence of fragile joy is the best way I know to be grateful. I did thank God for Elena’s great day. I do thank God for Micah peeing clean and grappling with his grandmother’s weeds. But my thanksgiving is complicated: it’s about inviting God to celebrate with me; it’s not about thanking God for easing up on me and setting my kids straight. Maybe this is the way to say it: I don’t give thanks; I am thanks.

During Elena’s and Micah’s crazy days, I found comfort in Hermann Hesse’s novel Siddhartha when the ferryman smiles and comforts a suffering father, Siddhartha:

Ask the river about it, my friend! Listen to it, laugh about it! Do you then really think that you have committed your follies in order to spare your son them? Can you then protect your son from Samsara? How? Through instruction, through prayers, through exhortation? My dear friend, have you forgotten that instructive story about Siddhartha, the Brahmin’s son, which you once told me here? Who protected Siddhartha the Samana from Samsara, from sin, greed and folly? Could his father’s piety, his teacher’s exhortations, his own knowledge, his own seeking, protect him? Which father, which teacher, could prevent him from living his own life, from soiling himself with life, from loading himself with sin, from swallowing the bitter drink himself, from finding his own path? Do you think, my dear friend, that anybody is spared this path? Perhaps your little son, because you would like to see him spared sorrow and pain and disillusionment? But if you were to die ten times for him, you would not alter his destiny in the slightest.

Of course, it’s not as though the path of samsara—the life journey of death, suffering, and rebirth—ends with a first child or a full-time job. Kilimanjaro is always losing its balance.

“Who would have ever thought we would see this day and that it would be so joyful?” How many nights did I stare into the darkness, wondering, trying to breathe? We all have to walk our own path, and for Elena and Micah, at the moment, the footing seems good. What I’m trying to say is, “I am thanks.”

Elena ready to welcome our grandson to the world.