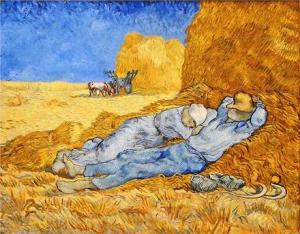 About the only thing I don’t love about napping is that word: napping. Nap makes people think of being caught napping or squeezing in a nap.  Siesta is a much better word, but you don’t hear many people say, “I’m going to take a siesta.” The monks of the Abbey of the Genesee in New York State include an optional siesta in their daily schedule. At 11:15 they gather for one of the monastic hours called Sext, which shares its etymology with siesta. The Latin sexta means sixth, which refers to the sixth hour after sunrise—noon.  After a short period of chanting psalms at 11:15, the monks eat their main meal of the day, then are free to rest until 1:05 p.m., when they gather for None and return to manual labor.  So it is at about noon, the sixth hour after sunrise and the tenth hour after their day begins, that the brothers do what I most often do at 2:00 or 3:00, the eighth or ninth hour after I rise: they (and I) take a siesta.

Nap’s etymology is anemic by comparison.  It comes from the Old English hnappian, which is “to doze, sleep lightly.” Its origin is unknown, though nap made its first appearance as a noun circa 1300. Since then, Yogi Berra said, “I usually take a two hour nap from one to four.” Robert Fulghum wrote, “Think what a better world it would be if we all-the whole world-had cookies and milk about three o’clock every afternoon and then lay down with our blankies for a nap.” Ovid said, “There is more refreshment and stimulation in a nap, even of the briefest, than in all the alcohol ever distilled.” Still, folks seem to feel guilty for napping, as Martha Stewart does: “I catnap now and then, but I think while I nap, so it’s not a waste of time.” So people who rest at midday without accomplishing something are wasting time? That’s napping for you.

Siesta has been troubled by no such cloud. Especially in places where noon to 3 p.m. is sweltering, the smart thing to do is eat a nice meal, then sleep. Multiple sources pin this wisdom down as the original rationale for a siesta. Damian Corrigan of about.com writes, “Spain is a hot country, especially mid-afternoon, and the traditional reason for the siesta is for the workers in the fields to shelter from the heat. They would then feel refreshed after their sleep and would work until quite late in the evening, longer than they would have been able to without the siesta.”

For many glad centuries Spain and countries with similar climates have taken the siesta for granted, just as I never questioned stores being closed on Sundays when I was a kid. Would that Spain’s custom span the ocean to multi-tasking North America! Unfortunately, according to Katya Adler of BBC News, the tide’s moving in the opposite direction: Spain’s “corporate culture now spurns the idea of daytime dozing as being unproductive, and the siesta is fast becoming an endangered institution. Spain is fast becoming a nation of sleep deprivation. Globalisation in the workplace and the rising number of multinational companies in Spain means businessmen cannot afford to disappear from their desk for hours.”

Penny wise and pound foolish. I’ll continue to take a siesta not only because I like it and find health in it, but also because the stampede toward profit and productivity irks me.  At around 2:00 p.m. today, I know what I’ll be doing.