This was almost 50 years ago. We were playing baseball on Wagner Avenue, home plate and bases drawn onto the pavement with chalk.

A prized part of my collection of autographed pictures from the early 1970s.

The other boys renamed themselves until Tommy was the only one left. He reached into his back pocket, thumbed through bubble gum cards and said, “I’m Tom Seaver.”

That’s how it was. My friends and I watched sports on television until we couldn’t contain ourselves, then ran outside to the stadium of our imaginations. We were both crowd and announcer. We cheered our home runs and cried out our alter egos after touchdowns. I can hear lanky Paul’s “Billy Joe DuPree” from the end zone, marked by a great maple in front of my house. He roared “Joe,” that one syllable so rambunctious and giddy that it still gives me a shot of adrenaline.

With a pause and deep breath I run the highlight reels from hundreds of pickup games with their line drives, swishes and spirals.

When nobody else could play, I shot hoops in a neighbor’s driveway. More often I grabbed a football and the cap to one of my mother’s hairspray cans to use for a tee and booted field goals over a telephone wire. For hours, as dusk eased toward darkness or sleet stung my cheeks, my name was Jan Stenerud, the Kansas City Chief who kicked soccer style before anyone else.

“Time let me hail and climb golden in the heydays of his eyes,” Dylan Thomas wrote of childhood in the poem “Fern Hill.” Wagner Avenue was the home field of my heydays, back when “I was green and carefree.”

I loved every win and loss, every bruise and dream. I loved Stenerud and Bench, “Sudden Sam” McDowell, Erie’s own Freddie Biletnikoff, LeRoy Kelly and “Pistol Pete” Maravich. And I especially loved John Havlicek.

I say “loved” advisedly. I never met these athletes, but they sprinted and shot through my seasons constantly. Their names alone revive my spirit.

So this morning when I read that John Havlicek died, “No!” came from down deep, involuntarily, not as lusty as lanky Paul’s “Joe” but plenty loud over a first cup of coffee.

I wasn’t yet four years old when Havlicek deflected a pass with five seconds left to preserve a Boston Celtics’ playoff victory. Even fans too young to remember the play have heard announcer Johnny Most’s legendary call. “Havlicek steals the ball!” he shouted. “Over to Sam Jones. Havlicek stole the ball! It’s all over! It’s all over! Johnny Havlicek is being mobbed by the fans!” 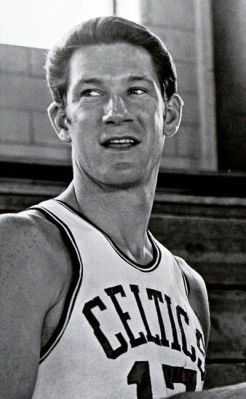 John Havlicek in the 1960s. I never did get his autograph.

Through the miracle of the Internet you can binge watch the 36-second clip, which is what I’ve been doing for hours. My favorite part is when Most says, “Johnny Havlicek.” I’d heard “Hondo” before, but never “Johnny,” a nickname that’s sweet to my ears.

“I’m Johnny Bench,” I once claimed, and that was half true. To grown ups in the old neighborhood, I was “Johnny Coleman.” Time was easy then, with folks visiting on front porches, nobody glancing at a wristwatch or smartphone. “Johnny” could be the title for a blessed chapter in my life.

In 2019 I’m “Pastor John” at St. John’s in Oniontown and “Pop” to my grandsons in Erie, but I never gave up being Johnny. I can’t pass a football field without sizing up the goalposts and wondering if my leg is as good as I recall. And I can tell instantly whether a basketball hoop is regulation. In high school I could dunk with two hands, the generous thighs my mother passed down to me perfect for jumping if not for nice-fitting blue jeans.

Between these sentences, my chin is parked on my knuckles. Hondo is gone. His teammate Jo Jo White, whose jumper had a hiccup I copied, and Hal Greer, who served up the ball that Havlicek famously stole, both died in 2018.

My heydays’ players are migrating into eternity. With each obituary I settle into the truth. The maple marking our end zone has been cut down. The neighbor’s garage looks lonely without the half-moon backboard and hoop. The wire I used for goalposts is there, though Mom’s hairspray caps are nowhere to be found.

Part of our Wagner Avenue end zone today, no maple to mark the goal line.

To borrow from the poet, time lets us “play and be golden,” but it never breaks stride. The good news is, visiting the old Wagner Avenue behind closed eyes is more filled with gratitude each time I do it. I was lucky.

Johnny Coleman had a great leg, after all. And, boy, could that kid jump.

Can you see the telephone wire I had to clear? It’s still there.