The real question is, “Why don’t I get up and go some place else?”

My morning at Starbucks in downtown Erie, Pennsylvania, began with a man shouting into his smartphone. Every word in The Drunken Sailor’s Handbook was deployed with such speed and spittle that the manager—courageous woman!—went over and told him to quiet down.

I thought we patrons might end up on the local news, but he apologized and soon walked calmly outside.

And is it ever cold out there, with the wind chill at 14 degrees. Sure, the weather could be worse, could be a blizzard stinging faces. Even in the still air, though, if you have nowhere in particular to be, the situation gets serious in a New York minute.

Erie is no Big Apple, but this is the urban scene playing out before me. In addition to students staring at their laptops, business types picking up their café whatevers, and readers and writers like me lost in words and white noise, there are folks who are homeless and/or mentally ill. Some seem like lost souls.

Of course, I’m doing guesswork. “All those who wander are not lost,” a popular saying goes. The pilgrim wearing a torn, mustard smeared parka might be a college professor for all I know. The guy who gets into heated discussions with his duffle bag and repeatedly sorts scraps of paper into stacks might have a cozy loft nearby. Clearly some live on the streets or in shelters.

A controversial Starbucks policy adopted in 2018 has made possible the spectacle I’ve described. A Philadelphia barista wrongly kicked out a couple of customers who hadn’t yet made a purchase, and the whole ugly episode played on TV. In response Starbucks wrote to employees, “Any person who enters our spaces, including patios, cafes and restrooms, regardless of whether they make a purchase, is considered a customer.”

The company obviously has protocols to deal with people who act up, but the intent here is otherwise. First, Starbucks wants to avoid further bad press—I’m not naive. But second, I do believe there’s some genuine hospitality in what is a risky business decision. As Gene Marks wrote on entrepreneur.com, “Do you sympathize so much [with the homeless] that you would sit next to someone who’s been living rough (and smells like it) after spending six bucks on a Frappuccino?”

Yeah, I hear him. I’ll even confess to a similar frustration an hour ago when a drunk man staggered in to use the rest room, but couldn’t resist working the room and making like a mime while checking out the pricey travel cups. The same annoyance takes hold, too, when guys who—doggone it—look sketchy slouch for hours at prime tables and thumb out text messages.

“Why don’t I get up and go some place else?” Well, I certainly could leave and not be kept awake tonight by guilt. In fact, I wouldn’t think ill of anyone who said, “This is nuts. I’ve got to get out of here.”

As it happens, the man who was railing away on his smartphone when I first arrived has returned with several companions in tow. Meanwhile, traffic through the front door, down the hallway to the rest room and back outside again has been steady.

I’ll mention one thing more. I’m no superhero, but my spidey sense—or is it my prejudice?—tells me that this person or that is up to no good.

By now you must be screaming, “Hey, Oniontown Pastor, so leave already.”

I’ll respond first with a request. Go ahead and consider me a fool, but don’t call me “holier than thou.” My duffle bag of sin often has me weak in the knees.

What also weighs on me is a truth that I’ve given my life to: The people here—from the unfailingly friendly baristas to the studious young ladies beside me to the pale, tattered procession that needs only to pee and warm up—are God’s children, equals in the ways that matter most. 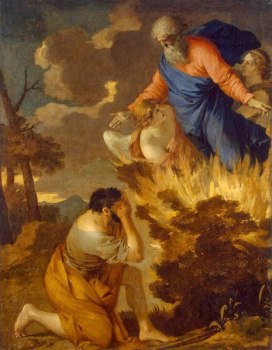 (Moses and the Burning Bush by Bourdon Sebastien, 1616-1671, on Wikimedia Commons)

A whisper tells me to abide with these sisters and brothers. It may well be that in eternity’s eyes, this Starbucks isn’t here so much to sell me beverages as it is to comfort those with no particular place to be.

In fact, as the arguing man paces around, making proclamations non-stop and itching for more trouble, that same whisper both shames and edifies me: “John,” I hear in the ear of my heart, “the place on which you are standing is holy ground.”