I used to make retreats hard work. Stick with the program! Pray, read, worship, rest, walk (or run), and write—this last one has always struck me as okay because writing for me is a way of meditating. This Gethsemani retreat has been different. I haven’t turned my short stay into an exercise in competitive contemplation. Relax, Coleman.

I’ve enjoyed a splash of wine in the evening, sitting at my desk, writing, and giving thanks for the cool breeze on my arms and face. 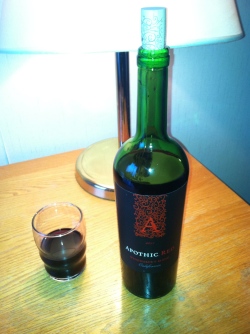 I’ve spent a couple of hours each morning in Bardstown, about fifteen minutes from the monastery, at The Java Joint. It’s unique in my experience: trippy, artsy to the eye, but Rush Limbaugh blusters on the radio—thank God for ear buds and Pandora—and, pleasant as the employees are, the coffee’s, well, ugh. Still, it’s been an amiable second home this week. Oh, yes, and free Wi-Fi. 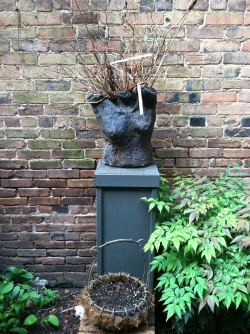 A Bust Vase in the Java Joint Japanese Garden (Suggesting What Many Women Claim, That Breasts Are Like Snowflakes

Painting in the Men’s Room by Cantrell, 2008 (What Are They Putting in My Coffee?)

I’ve also permitted myself a touch of interior grumbling, which is way out of line, considering what a gift this week has been. Yesterday morning I visited graves not within the monastic enclosure. Mainly I wanted to see the resting places of Fathers Louis (Thomas) Merton, Matthew Kelty, and Roman Ginn. Merton’s marker was so slathered with sacred litter that I had to nudge the leavings aside to photograph his name. Kelty’s and Ginn’s bore pilgrims’ droppings as well. I felt mildly cheated, wanting to pay homage to these monks I regard as spiritual masters, not look at what amounts to big fat red lipstick kiss marks all over the crosses bearing their names. But, thankfully, these harrumphs were fleeting, quietly scolded into silence by a few good laughs at my own fussiness.

I’ve even enjoyed some healthy irreverence. I have to think that Father Louis Merton is buried next to Abbot James Fox for cosmic reasons. According to Merton’s journals, he considered his abbot something of a megalomaniac, and they drove each other nuts for many years. Yet their bodies rest together, Dom James and Father Louis, hopefully having come to terms. 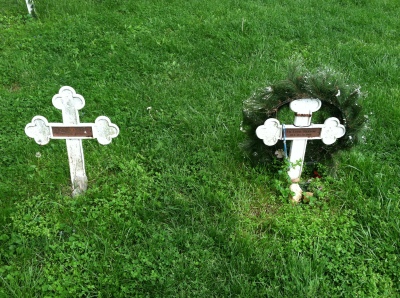 My last couple of posts have mentioned the birds of Gethsemani, the singingest flock I’ve ever heard. In all irreverence, I have to say they’re prolific in another common means of expression as well. One photo below shows a chair that obviously serves as a bird latrine. The other photo shows part of a statue called The Epiphany. Lovely work, and at first glance you might think the young Jesus is miraculously crying for our troubled world. Quick, call the Vatican! Ah, well. Turns out that the boy’s forehead is a favorite perch, and the tears are wept by birds lightening their burdens before take off. (How one enterprising sparrow or robin managed to weep into poor Jesus’ eye socket is a mystery.) Everything is sacred, and nothing is sacred. 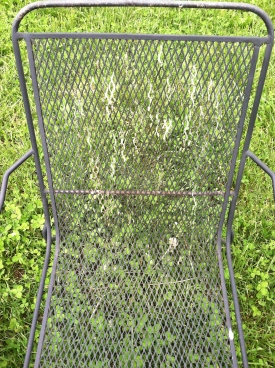 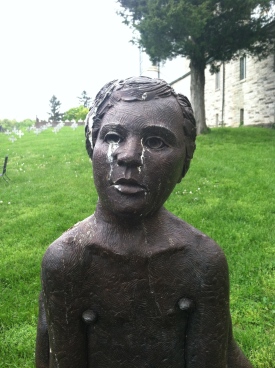 An Ambivalent Expression (For Good Reason)

I even used to feel guilty on retreats if I napped for too long. It didn’t stop me, but the voice of fervor and time’s winged chariot hurrying near were always on my mind. Not so now. Yesterday’s siesta, so needful, lasted two hours—two hours of snoring and drooling with abandon, followed by fifteen minutes of staring in a stupor at the ceiling. Lovely! In a couple hours, I’ll rest again, for as long as I please.

This is my last full day on retreat. Tomorrow I’ll head to Columbus, rattle around there for an afternoon, sleep one night in a hotel, then get home Saturday. In spite of the rugged stretch in prayer yesterday morning, this week has been joyful, freeing. Some would say I’ve been a retreat cheat, slinking off to a coffee shop in the morning and sipping wine in the evening. But this has been my retreat. 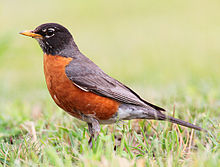 North American Robin (Just Like One That Wouldn’t Keep Still for a Portrait This Morning, Photo Credit: Wikipedia)

Gethsemani’s birds speak for me, in their singing and in their weeping.