I write to apologize. Your presidency was an awfully long eight years for me, but I read a newspaper column today that made me stop, think, and admit something to myself: From 2001 to 2009, I seldom looked at you with compassionate eyes. Instead, I allowed myself to sink into the mud of political frustration and rancor that has only gotten worse since you left office. 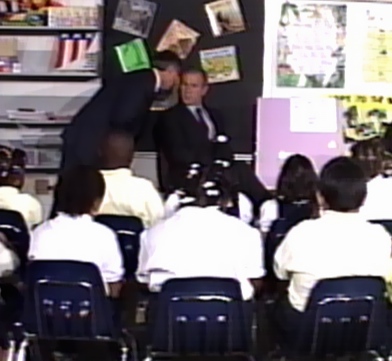 “A second plane has hit the second tower. America is under attack.” Still, you read The Pet Goat to the children so they wouldn’t be alarmed. Thank you. (Credit: Wikipedia)

The column that prompts my letter is by Cokie and Steve Roberts, “What Clinton, Bush can teach us about leadership.” You and President Clinton, the Roberts report, are starting the Presidential Leadership Scholars Program, and “part of [your] mission is to demonstrate that Washington does not have to be a cesspool of toxic partisanship.” I get the impression that you and President Clinton are comparing the political climate of your presidencies with that of President Obama and trying to push us out of the muddy cesspool that is only getting more toxic. And, the Roberts note, the libraries of Lyndon Johnson and your father are joining with you in this effort.

What would our country look like if your faces in this photograph reflected Washington’s modus operandi: good spirits and mutual kind regard and respect? Please help us to get there. (Credit: Wikipedia)

A photograph from the program’s launch shows you and President Clinton sharing a hearty laugh. More from the column: “By [Bush’s and Clinton’s] presence and performance, they embodied a key dimension of effective leadership. They showed that political rivals do not have to be personal enemies. In fact, they can actually like each other, trust each other, cooperate with each other. And they can do so while disagreeing on basic issues.” Oh, my Lord, may it be so. Please know that I’m sending prayers and every good wish your way for success.

You look like a man giving a genuine hug–to hurricane victims in Biloxi on September 2, 2005. (Credit: Wikipedia)

I’m pretty sure this spirit of collegiality and cooperation was alive and well in you during your presidency, and occasionally it would occur to me that your job was daunting, your challenges staggering. The trouble is, that sympathetic sentiment never made the southward journey from my head to my heart. Of course, now I watch the guy I voted for trying to get anything at all done, and sadness rests in my chest. I get it. For some time now, governing has been exceedingly difficult and often impossible. We’re stuck in mud. So I feel sad for you retroactively. Forgive me for being late. 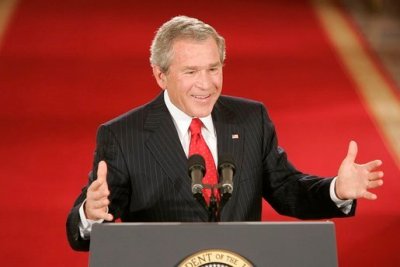 Lots of us didn’t care much for what we considered too much grin and swagger. I’ll speak only for myself: I was being petty. (Credit: Wikimedia Commons)

I should mention that during your years in office my next-door-neighbor and I agreed you would be a great guy to have a beer with. It’s strange, even with my passionate opinions about all that occurred on your watch, I would rather talk to you about incidentals. For example, your gaffs are legendary. My favorite is from 2002: “There’s an old saying in Tennessee I know it’s in Texas, probably in Tennessee that says, fool me once, shame on shame on you. Fool me you can’t get fooled again.” As I read this, I laugh, but honestly, there’s no edge to it. My old frustration has softened. George W. Bush was President, but he was also a guy with a microphone in his face for hours each day. So I probably should cut him a break. 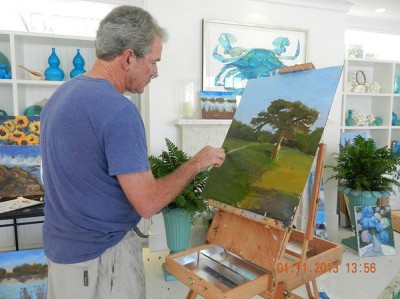 Express yourself, Mr. President. Why not? (Credit: LyleLanley99 on reddit.com)

I also recently saw one of your paintings, the one with your feet—those are your feet, correct?—sticking out of bathwater. Again, I’m laughing, but if you were here with me this morning, you would understand at once that it comes from a loving place. You’re a fellow human being, and when you were in the Oval Office, I routinely forgot that.

The Roberts mentioned something about you in their report that I wish I had known years ago. “And during Bush’s tenure, Clinton revealed, the president would call his predecessor on a regular basis and ask for his advice.” I can see now your humanity more clearly. A man who would paint his feet in the bathtub would have no qualms about calling the guy who worked the previous shift for help.

So, Mr. President, please accept my apology. It’s not fair to bemoan the intolerance and anger in Washington when I’m a willing participant. This letter may never reach you. If by chance it does, receive my good wishes for your Presidential Leadership Scholars Program and my thanks for what I now believe to be your sincere efforts to do what you thought best for our country.

I’m sitting in the breakfast nook, looking out as day turns dusk and watching micro-bubbles rise to the top of my Labatt 52, which hardly qualifies as beer.

Wife Kathy is in the dining room, making new pillow covers for her econo-redecorated study she now calls the lounge.

Son Micah downs a bottle of Bolthouse Farms Green Goodness, which looks like pureed spinach. It tastes good, though, and he deserves it after power washing his grandmother’s basement. 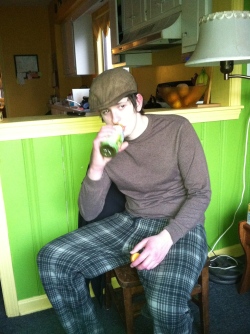 Dog Watson is flopped by Kathy. Cats Baby and Shadow are hiding somewhere. On the radio, Sheryl Crow sings, “If it makes you happy, it can’t be that bad.”

Why are you taking my picture?

In another song, from the year I got my driver’s license, Lionel Richie said he was easy, “easy like a Sunday morning.” Sunday mornings aren’t easy for me; they’re the 100-yard dash of my week; Sunday afternoons lately have been consumed by a nap that—as Will Ferrell said in a George W. Bush spoof—deserves a commemorative plaque. Today’s edition came in two volumes: 2:15-3:30 and 3:45-5:20. Wacky? Or sane as it gets? The latter, I’m pretty sure. After a morning of trying to say something authentic and useful to a bunch a wonderful Lutherans, baptizing a cool kid, and putting too many peanut butter cookies and fudgy no-bakes into my diabetic body (at the kid’s reception), the sanest thing to do was sit propped up in bed eating a lunch of whole wheat pasta with homemade marinara sauce, skimming Parade Magazine, and falling asleep.

It’s 7:59 right now, and I might still be asleep if Kathy hadn’t sat on the bed beside me at 5:20 and asked, “You know what time it is?” I’d been out for two hours and fifty minutes, but I bet I’ll still go to bed at 11:00 without any problem. While I snored, Kathy, who naps only when staggering with fatigue, tamed and contained a winter’s worth of compost. I do a lot of cooking and hope an avocado tree someday springs out of the mix. 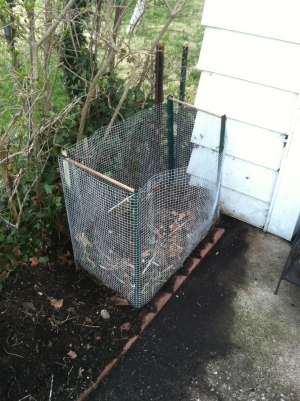 Just now Kathy and Micah headed out on a quick errand. She left the radio on and Stevie Nicks is singing a hard-driving song with words I’m not catching—all I’m getting is “stand back” and “it’s all right, it’s all right.”

It is all right. Easy like a Sunday evening. I love my family. Leftover soup—chicken vegetable in a cardamom and lime broth—awaits when I’m hungry. Truth be told, a couple more beers are in my future. I’m more refreshed than any person deserves to be, thanks to that ridiculous nap. I breathe in, breathe out. Everything around me is common, nothing remarkable, but it all seems crazy good—weak beer out of a wine glass.