Late this August afternoon I have an appointment at the kitchen counter and stove with a basket of homegrown tomatoes. Preservation is my assignment. Wife Kathy’s crop is coming in hot and heavy, and we have an agreement. She sows, weeds, frets and reaps, and I cook up and put up. I get the better end of the deal. “Boy, there’s nothing as satisfying and medicinal as getting my hands in the soil,” is something I’ve never come close to thinking, let alone saying. But put a ripe northwestern Pennsylvania tomato in front of me, and nothing short of love rises in my chest.

The taste alone is swoon-worthy, but together with corn on the cob, tomatoes grown in local dirt feed this pastor’s soul more than his body. For the past few weeks, since Kathy walked through the back door with the first glossy red-orange jewel of the season nestled in the setting of her fingers, I’ve mulled over the meaning of tomatoes and corn.

That garden gem my wife held was petite, of the plum variety. We split four humble slices, and I honestly can’t remember what else we had for dinner that evening. The flavor made me feel as though I was enjoying once again the meals and picnics that now live only in family albums, the photographs black and white or the unearthly tones of Instamatics.

The tomatoes of my childhood were sliced and adorned with a dollop of Hellman’s mayonnaise. A frequent accompaniment included corn on the cob and boiled potatoes. The salt and butter we laid on would have present-day nutritionists staging interventions.

Mom cut her corn off the cob and ate it over smashed potatoes—polite and tidy. Dad contended with his right out of the pot, and decades later I can summon the spectacle, the wonder of the sight. He seemed annoyed with the corn, as though it had done something that rubbed him the wrong way, and he meant to show those kernels in no uncertain terms who was boss.

Manners were observed around the Coleman table and on relatives’ patios, so there were never smacking sounds or slack-mouthed chomping. Ah, but Dad’s singleness of purpose, eyebrows drawn down as if his whole face were lending force to the chewing, and the crimson glimmer of his lips from all that butter and salt fill me with a son’s quirky pride: “Look at my dad have a go at that cob of corn!” I want to say. “Isn’t that something to behold?” 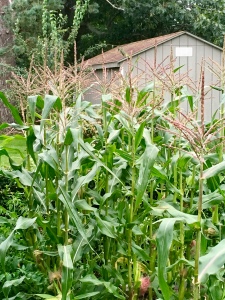 Within a few weeks I’ll be cheering Kathy when her first ready corn comes marching through the back door. She planted a raised bed of it on a whim, and the growth has been steady. We’ll get at least a few meals out of the experiment.

My wife’s crop won’t taste like the stuff Dad attacked and Mom mixed with her potatoes. The family palate of my youth called for what I now realize were plump, starchy kernels that owed most of their savor to what got slathered and sprinkled on them. Over time Kathy has converted me to sweet corn, which doesn’t demand the full, heart-clogging, blood pressure raising treatment, though that doesn’t make me cut back. In my case, excess in its many expressions is hereditary.

Some things last forever, but I try to relax about what doesn’t. “The grass withereth, the flower fadeth.” I left tomato and mayonnaise on white bread behind at my childhood home on Wagner Avenue. Now whole grain and sharp cheddar cheese join what’s always been the same: fat slices of a Big Boy and Hellman’s and too much salt. And the ears I shuck for Sunday dinners aren’t deep yellow like they used to be.

But no worries. As long as tomatoes and corn are on the table, the past is preserved. I can stop and appreciate my dad’s enthusiasm. I can see—as in this moment—Mom in her sleeveless blouse, sitting beside me. She had a large vaccination scar on her shoulder. I had almost forgotten.

Tomatoes just as Mom would have eaten them

As far as I know, Mom never cooked down tomatoes and froze them in plastic bags, which is what I’ll be doing soon. She was a canner who considered stewed tomatoes vegetable enough for any meal.

Before leaving for work this morning, Kathy said that she expects to smell tomatoes bubbling away when she gets home. The steam, rich and sweet, will cloud my glasses and set me to dreaming of a table with a place for every family at a feast that has no end.