Over the last ten years, I’ve learned how to answer the question, “How’s it going?”

Daughter Elena, twenty-four, is carrying wife Kathy’s and my lemon-sized grandchild and constantly breaking into uber-pearly smiles. Son-in-law Matt, who could probably build a harpsichord blindfolded and with half of his brain tied behind his back, installed a light-fixture today in our bathroom. Now, at 9:19 p.m., Kathy’s willing the new medicine cabinet into its designated spot. Micah’s watching a movie about Siamese warriors with mustaches and puffs of hair he finds annoying. He’s been pleasantly chatty over the past hour, quizzing me on quotes by William Cowper, Oscar Wilde, Aristotle, and Thomas Jefferson. Amazing what you can learn from packs of Mentos gum. I should have known the source of Micah’s favorite: “The whole is more than the sum of the parts.” His hint, “like some Greek guy,” helped.

Other details worth mentioning: at least one of the cats has been rogue pissing in the basement; money’s snug (what’s new); the house is messy in part because the bathroom project presents one complication after another; and a shark is sleeping in the Coleman family’s beach house.

“So how’s it going?” Splendidly! I’m serious. When Elena was a teenager she went through a Goth period, though black clothes and eyeliner were pimples on the rump her high school years. In my last post I went into Micah’s thrashing about and legal trouble. Sure, cat pee is unpleasant, but in the “how’s it going?” department, Alfred E. Neumann speaks for me: “What, me worry?” My recovering druggy son is playing the pan flute as he watches that fighting movie, and by Thanksgiving I stand a good chance of being a grandfather. So . . . I’m fantastic!

In the midst of my current messes and blessings, I’ve discovered yet another napping venue, which adds to my light spirits. A couple years ago, Renaissance Kathy remodeled Micah’s old basement bedroom, which he called the Batcave—don’t think superhero, think squalor. The rehabilitated room would be called the Beach House, a guest room where Kathy’s friends could stay when they come to Erie to sail on the Brig Niagara.

Last week, when we had a couple of hot, close days, I decided to take siestas down in the Beach House. Great choice. Kathy and I differ in décor tastes, she preferring bright and whimsical and I favoring earthy and depressing, but falling asleep in a cool space that reminded me of my wife’s smile was joyful. I told her the other day I’d consider transferring all dog-days-of-summer sleeping to the Beach House rather than putting the window air conditioner in the upstairs bedroom. We’ll see.

Visual Wind Chimes (No Breeze in the Basement)

The room’s not perfect. An artificial Christmas tree and air mattress, both in their plastic cases, have moved in temporarily, and a papier-mache shark Kathy made a few Halloweens ago is biting down on a love seat at the foot of the bed. Far from bothering me, sharing the Beach House with Jaws reminds me, again, of my wife. As Micah’s fond of saying, “It’s all good.” 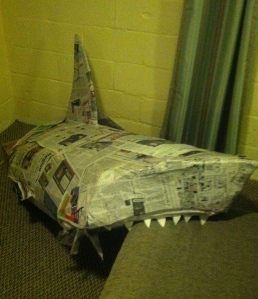 No, I Did Not Move the Shark for This Photograph

So how’s it going? I’ve got a new place to nap, kids whose future looks decent at the moment, and a wife who got that medicine cabinet where it belongs. The present blessings are more than enough. I’m doing fine.

2 thoughts on “A Shark, a Pan Flute, and a Lemon-Sized Grandchild: It’s All Good!”