I’ve been a Lutheran pastor for twelve years now: 624 weeks of sermons, give or take; hundreds of teaching moments, hospital visits, and pastoral counseling sessions; scores of babies baptized, couples married (“let no one put asunder”), and brothers and sisters buried; thousands of hours in prayer; Lord knows how many books read and Bible studies led. I’ve looked into dying eyes and held dying hands.

After all this and more, you’d think I’d have a handle on what exactly I believe in the God department. The truth is, when I pray these days, I feel as though I’m standing at the edge of a Grand Canyon. I’ve no clue how this world is put together and how it works. Some folks I love and respect believe that God has a plan for each of us; they may well be right. The problem is, I grew exhausted years ago trying to figure out what kind of divine plans could include teenagers taking their own lives when old people pray for death’s relief. If God does have plans, I’m content for now to be ignorant of them.

“Whatever You say.” (Credit: Wikipedia)

What I am interested in is letting go. My prayers leap into Grand Canyons, trusting that the Eternal Loving Now will see to both flight and landing. I open my mouth, but not much comes out. Lately, I’ve spoken three sincere words: “Whatever You say”—now and forever. I keep a framed photograph of Mister Rogers on my office wall. Yes, Mister Rogers. I tore it out of a magazine. At the bottom of the photograph is a quote: “Frankly, I think that after we die, we have this wide understanding of what’s real. And we’ll probably say, ‘Ah, so that’s what it was all about.’” Amen. 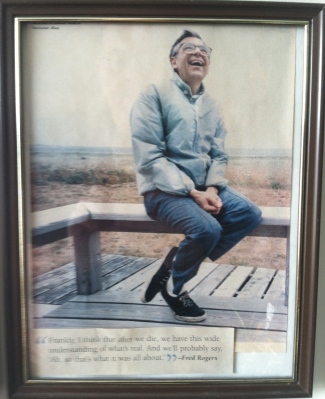 I also pray “thank you” a lot, but it’s no easy gratitude. I don’t believe that God looks at one father and says, “You know, I think John could use a break. I’m going to cure his son’s heroin addiction” and looks at one mother and says, “You know, I think Mary could use a good soul smashing. I’m going to give her son brain cancer and take him slowly.” My current narrow understanding can’t abide this brand of lordship. Each “thank you” I pray is whispered out of my chest and clutched throat into an extravagant, Grand Canyon Mystery. I cry the same way.

For a long time, sadness had the upper hand, but lately, gratitude has been winning. While gladness is hanging around, I’m wallowing in it.

This morning during yogurt and applesauce, I looked out at the backyard. Wife Kathy grows flowers, food, and foliage. Days go by when I forget to notice. Occasionally she takes me by the ear for a tour—that was yesterday, in fact, immediately after we got home from her colonoscopy and EGD. Who would want to assess begonias after taking such a plunging? That’s my wife. 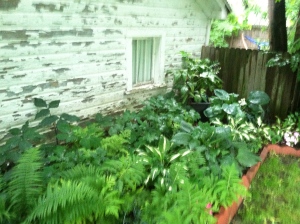 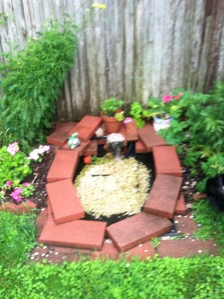 What Kathy calls her puddle. What dog Watson calls his drinking fountain. 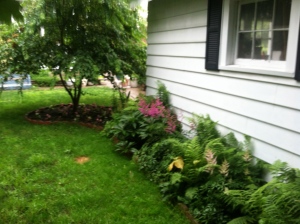 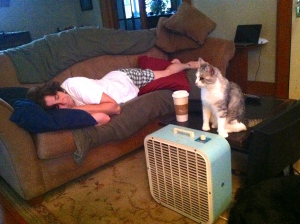 Kathy after the procedure and yard tour, cat and old K-Mart box fan looking on.

This afternoon I met with several church families and was struck by their goodness. These mothers and fathers treat their kids with love and tenderness and try hard to raise them with wisdom. As a father who’s messed up in the past with great intentions, I’m moved by parents who do their best. The hosts also served pesto-jack cheese, mango salsa, a great Southern Tier wheat ale, and brownies Mom thought were a bust—I ate three on my way out the door and could have taken out more had I not been worried about a diabetic coma.

I followed the brownies with a forty-five minute siesta on the old pre-school mats in my church office. Gracious! I slept for fifteen minutes at most, but woke feeling as if my whole body had a cleansing breath.

Back to this morning: I read a great quote by Charles Kuralt in Booknotes by Brian Lamb. Nappers everywhere should put this on the refrigerator:

I met a fellow in Key West, which is undoubtedly our most laid-back American community. [His name was] Clyde Hensley. Clyde says human beings were not made to labor from dawn until dusk. Human beings were just made to hang out. . . . Human beings were just intended to be on this earth to enjoy themselves a bit. It’s a philosophy you don’t hear much in this intense, work-oriented society of ours. But to the extent that one can survive without working from dawn to dusk, I’ve about decided Clyde is right.

My future grandchild, presently the size of a yam, has rhythm. Sparkling daughter Elena reports that her virtuoso husband Matt was strumming his guitar by her belly, and little tater started to dance. I suggested they play Marvin Gaye and see if the kid’s got soul.

A fellow blogger responded to one of my recent posts with a great quote by Calvin Coolidge, which will go in my worrier’s file (nice blog, by the way, and worth checking out: unexpectedincommonhours).

If you see ten troubles coming down the road, you can be sure that nine will run into the ditch before they reach you.

Another fellow blogger lives one block west of my house. Her dachshund Sophie tools around the neighborhood in a doggie wheelchair. (Her blog, Our Dachshund Sophie, is also a winner.) All this dog has to do is roll by, and my mood’s improved for an hour. 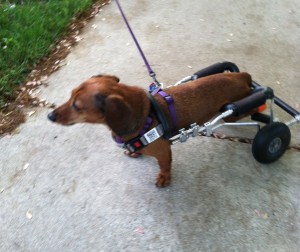 One last thank you: as Kathy and I relaxed at Starbucks this evening, son Micah texted to ask if I’d bring him home a coffee. “Ur order, sir?” I answered. (If you’re easily offended, skip his response.)

A decaf venti vanilla latte with 5 shots v[anilla syrup]. And can u poor the amount of vanilla powder in that an asshole would do? Just unscrew the cap and dump a shit ton in.

Why does this toilet-mouth text merit thanks? Because this is reality. I’ve got my son, and he’s clean, working full time, and a joy to be around. So I’ll bring him a disgustingly sweet latte. Bawdy heretic that I am, I chuckled at his two shots of vulgarity. My answer to his request? “Ok, rumphole.” 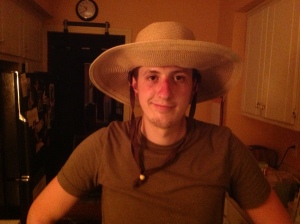 A clean Micah in good spirits, modeling a new sunhat.

There’s more, but you get the idea. It’s dark out now. Lying in bed soon, I’ll be leaping into a Grand Canyon, whispering gratitude to the Eternal Loving Now and trusting in a safe landing.