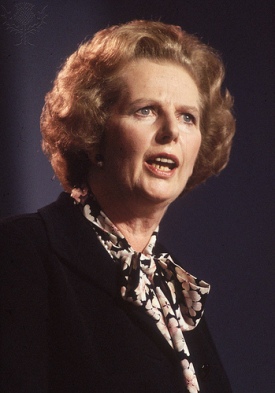 Margaret Thatcher, who passed yesterday, claimed in her prime to function well on four hours sleep per night. Maybe so, but in her late fifties, she discovered the power of napping. According to a 2009 dailymail.co.uk report, Cynthia “Crawfie” Crawford, Thatcher’s former personal assistant, says she helped her boss through Britain’s Falkland Islands War by teaching “her to catnap for 20 minutes—we called that a zizz.” From April 2nd through June 15th of 1982, the Prime Minister “never changed into her bedclothes. She sat fully dressed, huddled round a two-bar electric fire, nervously listening to the radio for news of the conflict, nursing a glass of whisky while husband Denis slept in the spare room.” Crawfie, who preferred gin and tonics but deferred to her boss’s insistence that “whiskey was much better for energy,” also mentions that in addition to a few zizzies during the night and one in the afternoon, “Thatcher relied on vitamin B 12 injections to maintain her energy levels throughout the day.”

In 2011, Great Britain’s second-most-noteworthy napper (Winston Churchill was first) even had a gene named after her. “Scientists at Germany’s Ludwig Maximalians University of Munich . . . found that one gene, called ABCC9, influences sleep duration and could explain why certain people seem able to operate on limited amounts of shut eye” (dailymail.co.uk). They called ABCC9 the Thatcher gene. In a study of 4000 subjects, the Munich researchers “discovered that people who had two copies of one common variant of ABCC9 slept for ‘significantly shorter’ periods than people with two copies of another version.” For good measure, the team fussed with the ABCC9 gene in fruit flies and had them sleeping less than before.

I’m glad there’s a gene that explains why some lucky sorts don’t need much sleep, but I’m more glad to know that the energy valley I enter around 2:00 p.m. has nothing to do with laziness. It’s my Thatcher gene telling me to take a zizz. Crawfie reports that when the Falklands War ended, Lady Thatcher “kept to the habit [of afternoon zizzies] for ever afterwards.” May her final nap be peaceful and healing.