Hanging on and Letting Go

The photograph of Mom and Dad may as well have fluttered into my hands from a cloudless sky. They were a couple of kids, younger than my own Elena and Micah, now 30 and 27. There’s no “Dolly and Denny” followed by a date. My guess, late 1947, their first apartment, no children yet. Mom is seated, Dad standing over her shoulder, passing her hair through his fingertips. Their expressions are carefree, Mona Lisa smiles on them both. The moment is unutterably tender, the future still a blue heaven of hope.

Mom died in 1998, arthritis remedies having given more punishment than relief. The burden of divorce pained her sense of self in like fashion. I miss how she tucked my long hair behind my ear when I was a teenager.

When I had hair to tuck behind an ear.

Dad lived to be 85, but insisted in his last years that he was 88. “Is my mother still alive?” he asked now and then, anguished and embarrassed. “But she couldn’t be, could she? I just can’t remember.” He taught me to hold doors open and pay respects.

Dad’s possessions have slept in my basement since 2012–picture albums and a rattle of keepsakes. I could say that they’ve collected dust because I’m lazy or that I’ve been passive aggressive toward wife Kathy’s pleas to decide what to hang onto and what to let go of. The truth is, I didn’t want to stare into those boxes of memory and visit again with those whose absence still hurts my chest if I think of them for long.

But once the first lid was off, the choices were obvious. Dad was meticulous in documenting the mundane and daily: scores of various views of his living room and dining room and bedroom, populated only by furniture and lamps; multiples of the same snowbirds lounging beside the same Palm Bay swimming pool.

Sorting was easy. The keepers went beside me on the couch: a boyish Navy portrait: nameless relatives gone on to glory before my time; a former residence, front yard and stoop. There weren’t many of Mom, which shouldn’t be a surprise. After twenty-something years with her, Dad quickly remarried. In an instant, “Dolly and Denny” turned to “Denny and Mary.” I hold no grudge on this account. My parents simply weren’t suited to each other. Their pursed, tired expressions on and off camera often spoke to me of disappointment that wore a rut into their souls. 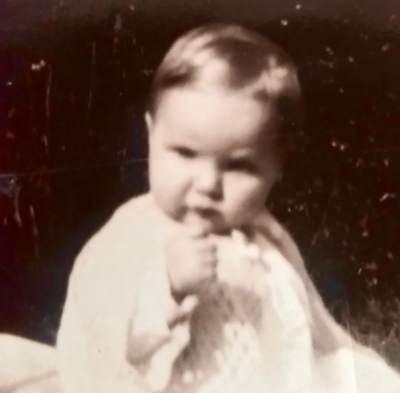 Gone on to glory. Nameless. Not pleased.

After separating in the mid-1970s, they both knew joy in life, but it’s hard to describe them as happy people. Their union yielded four fine children, but also a mournful descant that sounded beyond nuptial vows to the end of their days.

This, then, is how I remember my parents: two people with much to celebrate, but who often swam up upstream emotionally. For decades now I’ve thought of them with warmth, but more than a little sadness.

Such sentiments–not enough to bring tears, but plenty to clutch at the throat–stayed with me for the hours I sorted through what was dear to Dad–hanging on and letting go. Then, suddenly, that picture.

One of my siblings told me that Mom and Dad were happy for their first eight years together. As the youngest of four, though, my memories are of a tense, distant relationship.

It’s naive to infer too much from one photograph, but I know my parents’ faces well enough to detect fakery. In this one moment, on this one day, my mother and father were glad to be together. Whatever went wrong was still some ways off.

Mom was fussy about her hair, but here it was loosely pulled back. Dad held the ponytail, gently, playfully. Beautiful. That’s the only word for it. They were both so beautiful, and to find them this way moves my soul the way an excellent port wine warms the throat.

Eventually I’ll stop carrying Dolly and Denny everywhere with me, setting them to my left while working, on this coffee shop table now and on my desk at St. John’s in Oniontown, where I stare at them, then out at the pine trees and corn stubble and red barn. After 57 years it is as if I’ve recovered a treasure I never knew was lost.

I want to take these two kids into my arms, watch them together, hear their voices again. They did once love each other, after all. I’ll hang on to this truth for the rest of my life, even as it hangs on to me.

4 thoughts on “Hanging on and Letting Go”