Oniontown Pastoral: This Is Life

Driving with wife Kathy and grandsons Cole and Killian toward what we call “Grandma Kathy’s house,” I was both amused and horrified by the young man operating a battered economy four-door in the next lane. He was multi-tasking, and the other cars on the road were the least of his worries.

Now, who among us hasn’t seen a fellow driver texting while doing one of the following: lighting a cigarette, applying lipstick and making kissy faces in the rearview mirror, inhaling shoestring French fries, or pretending the steering wheel is a bongo drum? 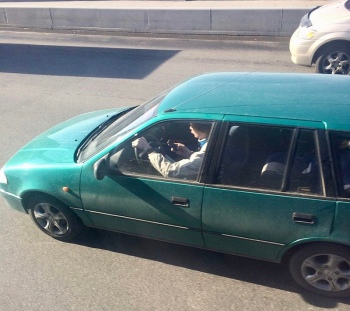 Put a cup of guac in this guy’s left hand and you get the idea. (Credit: Wikimedia Commons)

But I’ll bet you’ve never witnessed somebody manipulating a smartphone with one hand, holding a little plastic cup in the other, and going at the guacamole therein like a dog lapping up ice cream. The guy’s texting hand also had driving duty, as the cup in the other hand had to be within range of his tongue. It was not pretty.

Of course, texting and eating Mexican is all fun and games until pedestrians get run over, which is almost what happened. A multi-generational family neglected physical wellbeing and migrated across four lanes of traffic right in front of Pastor Coleman’s and Prince Avocado’s cars. The whole lot wore dull expressions, as if they had just decimated an all-you-can-eat buffet. I can’t exaggerate the oblivion with which these eight bipeds flowed like molasses through traffic and the wonder of their survival.

Later that same evening, after the grandsons got picked up from their playtime with Grandma Kathy and Pop, the former sat on the couch and shook her head. “I can’t stop thinking about that family,” she said. “They could have been killed.” Such an outcome would also have gutted the future of one twenty-something multi-tasker.

Reasonable citizens would agree that everybody should quit messing around while driving. As for myself, I mean to push the point further and adopt one-thing-at-a-time as a standard practice. 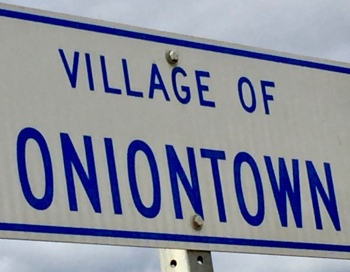 My commute from home in Erie to work at St. John’s Lutheran Church in Oniontown has recently reminded me that managing several tasks simultaneously threatens life in more ways than one. A few weeks ago on I-79 South a woodchuck waddled across my path and, sad to say, he is burrowing into fields no more. Since that day, on various byways leading to Oniontown, a procession of turkeys, a family of geese with goslings and a graceful fox have played Hyundai roulette with me.

If I had been combing the few hairs I have left or fussing with the radio dial, there might well have been additional casualties. Thank goodness. I’m a guest on the animals’ land. They are not pests on mine. But my motivation for finishing one task before taking on another is about more than an aversion to squashing wildlife. I’m equally concerned about squandering blessings. The older I get, the more I realize that locations from Erie to Oniontown to Everest are waiting for me to accept their generosity.

One of my heroes, Dick Proenneke, gained notoriety through his determination to notice what planet Earth seemed eager to give him. In the summer of 1967 he chopped down trees in the Twin Lakes region of Alaska and let the stripped logs age. In 1968 he moved there for good to build a cabin with hand tools. Fifty-one at the time, Proenneke was extraordinarily energetic, strong, and resourceful. In ten days he had the walls of his 11’ x 14’ cabin ready for a roof, which he completed in short order. Come September, he added a fireplace and chimney made out of rocks he had gathered on his many hikes.

He wanted to be “alone in the wilderness,” as a documentary about him is entitled, after nearly losing his vision in an accident while employed as a truck mechanic. Proenneke decided that he would treat his eyes to as much beauty as they could handle, and Alaska was the place to do it. His journals, photographs and 16 mm films of thirty-five plus years spent in a lovely, though unforgiving, environment are instructive and inspiring.

No surprise to anyone who knows me, lighting out for the lonely territory is not on my bucket list. Some afternoons mowing the lawn feels like hiking the Appalachian Trail. Besides, surrounded as I am by loving family and friends, a little solitude goes a long way.

Fortunately, following Dick Proenneke’s example doesn’t demand residing anywhere other than 402 Parkway Drive or serving a church in a village more remote than Oniontown. What I need to do is pay attention—to the turkeys and geese, to the fox so light on its feet, to Grandma Kathy, to Cole and Killian.

If I don’t behold blessings one at a time, I appreciate none of them. Everyone and everything gets a turn. This is life.

4 thoughts on “Oniontown Pastoral: This Is Life”