A Meditation on God’s Will

My Lord God, I have no idea where I am going. I do not see the road ahead of me. I cannot know for certain where it will end. Nor do I really know myself, and the fact that I think I am following your will does not mean that I am actually doing so. (From a prayer by Thomas Merton) 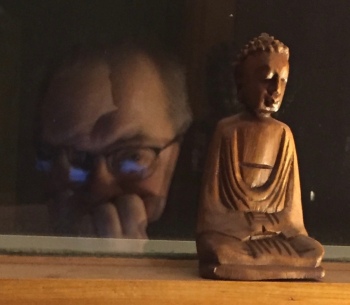 A reflection with Buddha keeping me company

These opening words of a prayer written by Trappist monk Thomas Merton evoke in me a mirror moment. Yes, the mirror is a cliché worn threadbare, but stay with me. I’ll wager most thoughtful people occasionally stare at their reflections—not out of vanity, but ontological wonder.

If you’re my age, your skin is slowly disappearing behind crow’s feet and spots. Maybe a spare chin is descending. Or you have half-moons like pale bruises under your eyes.

Years, of course, are beside the point. Your pupils and mine are curious. “Who am I?” we sigh. “What am I about?”

We don’t linger for long, though. No answers are forthcoming. Our questions retire with us each night, but never leave.

In my case, they’re light sleepers. Where am I going? What does the road ahead look like? When will it all end? And am I doing good in this world, helping more than hurting?

“Boy,” you’re thinking, “keeping company with Coleman sounds as pleasant as a picnic in a sleet storm.”

You’d be surprised. For me, Merton—known to his fellow monks as “Father Louis”—has liberated humanity by admitting truths about our earthly residency. “I have no idea.” “I do not see.” “I cannot know.”

Precisely. We know precious little. I’m barely fluent in the language of my own soul. Where am I headed? Why was I scheduled for an appointment on this planet?

Thomas Merton in his hermitage. He was younger than I am now when he died. (Credit: Wikipedia)

And where will my road end? Thomas Merton died in Bangkok on December 10, 1968, after giving a lecture—twenty-seven years to the day after he entered the Abbey of Gethsemani in Kentucky. Clumsy with all manner of devices, he was electrocuted by a defective fan.

God could be accused of calling Father Louis to his eternal reward in a grim fashion, but you won’t hear the accusation coming from me. After the oddities, injustices and monstrosities I’ve witnessed, my chin simply won’t wag over matters far beyond my station. And whenever anybody so much as hints at discerning the Lord’s motives, I call “bullshit.”

Still, I’m not without sympathy. Folks who turn everything from finding lost keys to perishing in a flood to surviving a house fire into an act of God need patience, not criticism.

Existence is as frightening as it is beautiful. “God’s will,” for those who claim to understand it, is a nerve pill. To explain how life works is to solve the Divine Mystery and anesthetize our fears.

Sorry, the collective force of human anxiety and hubris can never tame the universe or peek behind God’s veil. Words like “faith” and “belief” are used in religious conversations for a reason. We “do not see.” We “cannot know.”

But Merton’s prayer doesn’t end with resignation. After admitting that he doesn’t know God’s will, he says, “But I believe that the desire to please you does in fact please you. And I hope I have that desire in all that I am doing. I hope that I will never do anything apart from that desire. And I know that if I do this you will lead me by the right road, though I may know nothing about it.”

So what exactly does the monk know? That God will lead him “along right pathways,” but every how and why remain resolute secrets. 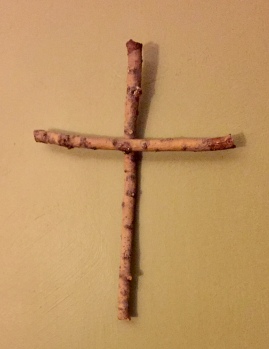 A cross made from branches along a trail in Michigan.

I’ve learned to receive such mysteries as blessings. The yoke of interpreting the inscrutable is broken. I “know nothing about” how God figures into each day’s hairpin curves. I don’t have to speculate about divine appearances along any wayfarer’s road, not even my own. Maybe most liberating of all, I’m under no obligation to prove that God exists or to justify the cross that has kept vigil over my prayers for going on twenty years.

I do pray an awful lot, sometimes with words, mostly with silence. More than anything else I’m an unfurled sail, waiting for a breeze of wisdom and compassion to set me on the right course.

9 thoughts on “A Meditation on God’s Will”